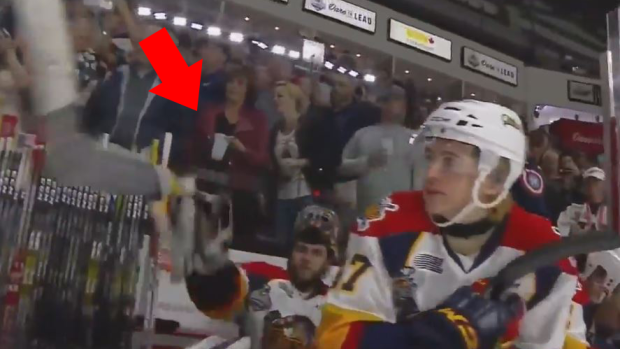 For the third time in ten years, the Windsor Spitfires have won the Memorial Cup Final.

The 2017 Final was a close game all the way through, with Maple Leafs prospect Jeremy Bracco assisting Aaron Luchuk on the game-winning goal early in the third period to give the Spitfires a 4-3 win over the Erie Otters.

Despite a strong surge in the third period, the Otters came up just short on the night. Following the loss, Otters goalie Troy Timpano let his emotions get the best of him, appearing to launch his stick at a cameraman who came passing by Erie's bench to get a reaction shot.

19-year-old Timpano started in net for the Otters Sunday night, allowing 4 goals on 22 shots. While you would like to give the young netminder the benefit of the doubt in what was undoubtedly an emotionally tough moment, his stare down into the camera alongside assistant coach B.J. Adam's reaction to the toss makes it seem as if his stick toss was indeed intentional.

It was an unfortunate moment in an otherwise fantastic Memorial Cup Final. On a more positive note, Otters captain Dylan Strome took home the Memorial Cup MVP award in what will be his final junior game.