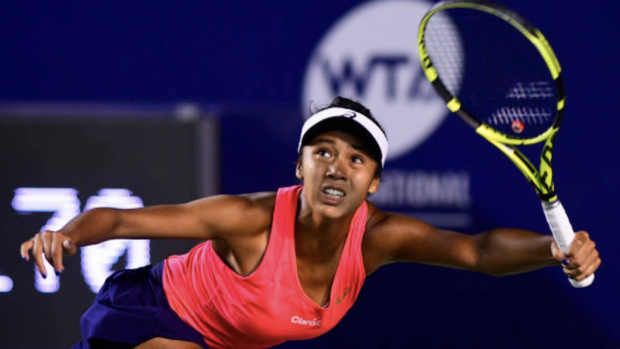 Leylah Fernandez returns the ball during the round of 16. (Photo by Andrea Jimenez/Getty Images)

There are more and more talented new faces coming into the sports world every day and it’s incredible! We would hate if you missed out on the opportunity to watch some of Canada’s rising athletes do what they do best, so it’s time to start keeping tabs. From familiar faces to new ones, here are 10 female Canadian athletes who have been absolutely killing it in their sport.

Canada has another female Tennis star on the rise and it's not Bianca Andreescu! Leylah Annie Fernandez is an 18-year-old professional tennis player who has been absolutely killing it on the court. The 18-year-old just made her Grand Slam debut at the 2020 Australian Open and in June of 2019, she became the first Canadian female winner of a junior Grand Slam title in seven years after defeating Emma Navarro in the French Open Girls Singles Final. Following that, in February 2020, Fernadez became the youngest finalist in the Mexican Open when she defeated Renata Zarazua 6-3, 6-3. The Montreal native is currently ranked No. 88 in the world!

Brooke D’Hondt is only 15 years old and she’s already making a name for herself! People knew to start taking this young snowboarder seriously after she won the 2019 Burton Junior Jam at only 13 years of age. With the win, D'Hondt was invited to both the Dew Tour in Copper and X Games in Aspen where she was given the opportunity to ride alongside some of the best female snowboarders in the world. In the Women's SuperPipe, D'hondt finished sixth place at the 2020 X Games in Aspen.

Will captain Jordyn Huitema lead her teammates to victory? pic.twitter.com/Ts37hgnDAo

Jordyn Huitema is this generation's most exciting female professional Canadian soccer player. The 19-year-old is a forward on French Division 1 Feminen club Paris Saint- Germain and the Canadian national team. At just 15, she became the third-youngest to play for Canada's women team at the top level and second-youngest goal scorer in Canadian women's national team history. With 23 goals in her International youth level, she finished with the second most goals in Canadian soccer history behind Christine Sinclair (27). Huitema will turn 20 in May and is  already the highest-scoring canadian in the history of the EUFA Women's Champions League. Catch Huitema with Sinclair on Team Canada in the Tokyo 2021 Olympic games.

MIKYLA GRANT-MENTIS PUTS US UP 1-0 FOUR MINUTES INTO THE GAME WITH HER 20TH GOAL OF THE YEAR! #GoMack | #HEAW pic.twitter.com/DM3Nf3k9gq

Mikyla Grant-Mentis shined for the Toronto Six during the National Women's Hockey League tournament in Lake Placid, New York. Grant-Mentis led the Toronto Six in goals this season with 5 in 6 games before the season was suspended due to COVID-19. Prior to playing on the Toronto Six, Grant-Mentis spent four years at Merrimack College where she played on the Women’s Division 1 hockey team. In four years and 137 games, Grant-Mentis totalled 56 goals and 61 assists for 117 points. She holds the team’s record for points and assists, and is second all-time in goals.

Meet Canada’s next superstar swimmer, Taylor Ruck. Ruck made her Olympic debut at Rio 2016, winning bronze medals with the women’s 4x100m and 4x200m freestyle relay squad. With this dominating performance, Ruck became the first ever Olympic medallist born in the 2000s along with Penny Oleksiak.

Buchanan, a sprint standout from Oklahoma, represented Canada in the 100 meters at the 2017 World Championships. She owns a personal best of 11.17 from her runner-up finish at the 2018 Big 12 Champs. #TeamTotal #Total2018 pic.twitter.com/clAxFVVfc6

Leya Buchanan is a Canadian sprinter from Mississauga, Ontario. She made her IAAF World Championships debut in 2017 when she competed in the women's 100 metre sprint. Buchanan finished second in the 100m at the 2017 and 2018 Canadian Championships and reached the 100m final at the 2018 NACAC Championships in Toronto where she went on to finish eighth.

You should know the name Ellie Black if you don’t already. The two-time Olympian (2012 and 2016) scored the best-ever result for Canada at the 2019 World Championship, finishing 4th A-Around. Black is also a two-time Pan American Games all-around champion and a six-time Canadian national all-around champion. At the 2019 World Championships, Black won a total of 10 medals in two Games, becoming the most decorated canadian gymnast at the 2019 Pan Am Games. At the 2016 Olympic Games, Black finished 5th in the individual all-around, the highest placement ever recorded by a Canadian gymnast.

Charity Williams is quickly becoming one of Canada’s most exciting female rugby players. Within three years she went from a club team, on to the provincial and then to national team programs. Williams was a part of the Canadian Women’s Sevens Youth Olympic Team who placed second at the 2014 Youth Olympics in Nanjing, China. She also led team Canada to Bronze at the 2016 Rio Olympic Games.

Annie Guglia Is the Skater with a Master’s Degree Competing at the 2020 Tokyo Olympics https://t.co/nBzOpGu0jv pic.twitter.com/m3PUG3saK7

Annie Guglia has been breaking barriers as a female skateboarder for the past 10 years. She’ll finally be able to show the world what she can do this summer when skateboarding makes its debut at the Olympics at Tokyo 2021. The Montreal native became the Canadian street skateboarding champion in March 2020, Vice-Champion in 2019, and won the Empire Open title in 2018.

Kylie Masse was named the top female swimmer of the #PanPacs2018 Championships for her gold-medal swim in the 100 backstroke!
WE ALL #BLEEDBLUE #WeAreTO pic.twitter.com/J7Aw076jPR

Kylie Masse is another Canadian swimmer who is kicking butt in her speciality: the backstroke. The back-to-back women's 100-metre backstroke world champion will look to win her first Olympic gold medal after taking bronze in that event in 2016 in Rio. While winning her title, she also became the first Canadian woman to win back-to-back championships. As well, she won two gold medals at the 2018 Commonwealth Games in the 100m and 200m backstroke, and gold in the 100 m at the 2015 Summer Universiade!