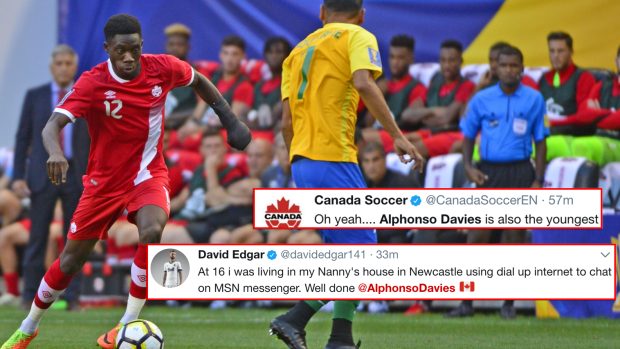 Friday night, Canada opened up the 2017 Gold Cup against French Guiana and they won 4-2 to earn three points.

The biggest star of the night was Canada's Alphonso Davies who scored two goals in his Gold Cup debut.

Oh yeah, did we forgot to mention, the Whitecaps player is also just 16-years-old.

And there we have it, Alphonso Davies' first goal with #CanMNT. 👊 pic.twitter.com/kxgsb0BJ4K

COMPOSURE. @AlphonsoDavies bags his second of the night. #CanMNT pic.twitter.com/BSr9ckmuVZ

Bottom line, this kid is really good and fans are excited about the future of Canada's soccer team with him leading the way.

At 16 i was living in my Nanny's house in Newcastle using dial up internet to chat on MSN messenger. Well done @AlphonsoDavies 🇨🇦

Nice win for @CanadaSoccerEN in the Gold Cup. Fantastic performance from @AlphonsoDavies with two goals! pic.twitter.com/AGTWQvW3PF

#GoldCup17 Man of the Match and man of the hour after the first @GoldCup match, @WhitecapsFC 's Alphonso Davies @MLS pic.twitter.com/WNFXGhr9NG

Man of the match, without a doubt, has to be Alphonso Davies. Scores the winner and an insurance goal. Lots of honourable mentions though...

So.... @AlphonsoDavies for Premier of BC

16 year old Alphonso Davies with a brace in his first competitive match for Canada. That kid’s going places.

Good win for the 🇨🇦lads! Rough 10 mins but a win's a win! Class goals from @AlphonsoDavies but MOM for @scottyarf for me sorry! #RanTheShow

Alphonso Davies is now the youngest player to...

I love Alphonso Davies so hard on #CanMNT. 2 goals tonight. Love his story. Love his play. And he’s just 16. pic.twitter.com/1U0IwZdJAu