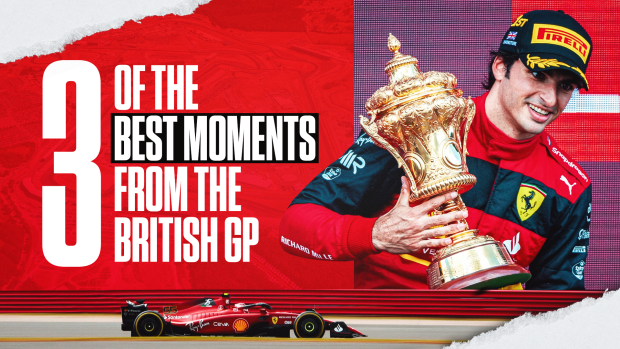 Formula 1 returned to the United Kingdom this week with the British Grand Prix at Silverstone. This weekend held one of the most awaited events on the calendar as it was hosted in the birthplace of F1. It was also the home race of three of the most popular drivers on the grid in Mercedes’ British duo of Lewis Hamilton and George Russell along with McLaren driver, Lando Norris.

The weekend was dramatic from beginning to end from Carlos Sainz getting pole position to the scary accident off of turn 1 involving Zhou Guanyu Silverstone, it’s safe to say we were on the edge of our seats.

So we’re counting down our podium of the best moments from the British Grand Prix!

In third place, we have the five-man battle for the podium that ensued in the 46th lap. While race winner Carlos Sainz was leading the pack, 4 seconds behind him the hustle for a podium spot was raging on. It started in lap 45 when Sergio Perez and Charles Leclerc were battling it out for P2, this gave Lewis Hamilton the opportunity to break through. The three drivers were soon joined by Fernando Alonso and Lando Norris in what became five cars within 20 metres of each other. At the end of the 6 lap fight, Perez and Hamilton ended up on the podium behind Sainz. Overall it was a very exciting end to the race!

WHAT A BATTLE! OH MY GOODNESS!

The battle for 2nd is on in the closing laps of the #BritishGP!

After contact in Copse corner in the first lap forced Sergio “Checo” Perez into an early pitstop to repair his damaged front wing Checo was left at the bottom of the grid. With his newly repaired car Checo re-entered the track at P17 from there he worked his way up the grid until lap 45 where he battled it out for his P2 win. After making it from P17 to P2, Checo was voted Driver of the Day and rightfully so.

WHAT A BATTLE! OH MY GOODNESS!

The battle for 2nd is on in the closing laps of the #BritishGP!

Before we move on to our P1 we need to hand out an honourable mention and this weekend it goes to Mick Schumacher. The son of racing legend Michael Schumacher arrived in F1 last year but finished the season 19th with 0 points and this season was not looking much better for him until this weekend. Mick started the race in P19 but after a series of retired cars and working his way up the grid he was battling it out with defending champion, Max Verstappen for 7th place. While he finished in P8 behind Max, Mick secured the first points of his Formula 1 career. The result also gave us this adorable moment between Mick and veteran driver, Sebastian Vettel:

Carlos Sainz started off the day in P1 after securing his first pole position on Saturday. The Spanish driver has been in F1 for 8 years and the British GP was his 150th career start. Sainz did not start off strong with Max Verstappen taking the lead almost instantaneously but with the red flag early into the race, Sainz was able to restart in P1 with a much better result the second time around. Although he lost the lead to Verstappen on lap 10, Sainz regained it just two laps later after damage to the Red Bull car prevented Verstappen from being able to fully perform.

Then in lap 31 Sainz was sitting in second behind Lewis Hamilton and was asked to surrender his position to teammate, Charles Leclerc. After an error by Leclerc on lap 43 Sainz was able to regain the lead where he held onto it for the last 9 laps of the race. In one weekend, Sainz was able to secure his first pole position and first Grand Prix win and that in our book puts him at the top of the podium.

From pole position in his 150th start, the Spaniard is finally victorious in #Formula1 after an unbelievable #BritishGP! pic.twitter.com/VaQls8fcMK

What was your favourite moment from the British Grand Prix? Let us know @BarDown