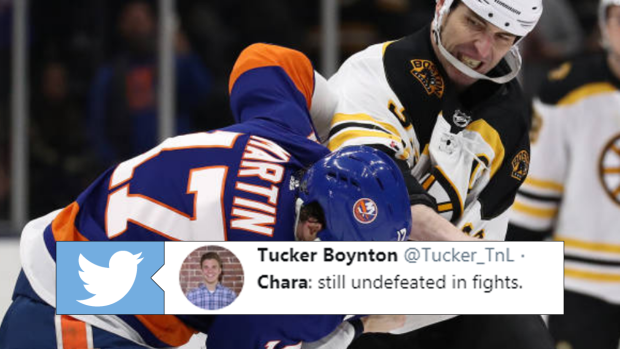 It’s a pretty big flex to be 42-years-old and still beating professional hockey players up. In fact, there’s pretty much only one man that can claim to be doing that – Big Z.

Zdeno Chara has been rag-dolling NHL enforcers for over two decades, with most unable to overcome his towering 6’9 stature. While whipping players around with his brute strength, Chara peppers in some punches with his long reach, and basically just stands there as other try to swing for him.

Matt Martin of the New York Islanders got a taste of it first hand on Tuesday night when he dropped the gloves with Chara to begin the 2nd period. While Martin seemed to bring the energy of an ambitious enforcer, Chara had no problem standing there while Martin through flurries of non-connecting punches, and was eventually sent to the ice after some Chara returns.

Chara repositions himself at will with Martin, who is one of the more decorated fighters in the league. Chara goes from overhand to undercut in a move few players can do. To keep it classy, Big Z appears to check on Martin after he hits the ice, and gives him a pat on the back in a very “good job little buddy!” kind of way.

Seriously, why are people still trying to scrap this guy?