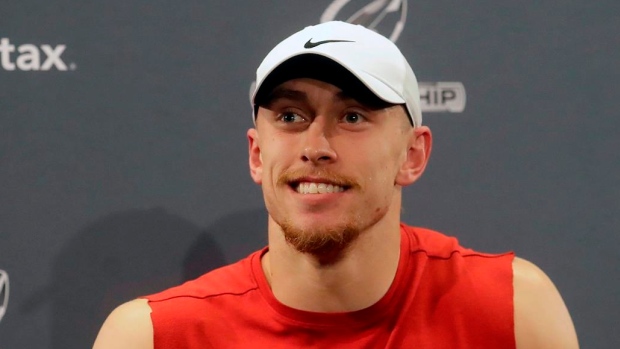 Before he takes on the Kansas City Chiefs with a Super Bowl championship on the line, George Kittle of the San Francisco 49ers decided to do something special for the family of fallen Army sergeant Martin “Mick” LaMar.

He’s providing LaMar’s surviving family with a pair of tickets to Super Bowl LIV in Miami, which, mind you, are starting at about US$5,000 on the resale market. It’s great to see Kittle come through to give this kind of experience to the LaMar family.

Excited to provide 2 tix to the #SuperBowl to the surviving family of @USArmy SGT Martin "Mick" LaMar of Sacramento (KIA 01/15/2011). Humbled to work with @USAA & @TAPSOrg to honor his legacy. We will never forget. #SaluteToService 🇺🇸 pic.twitter.com/OFeE4cQV2t

Thanks to @gkittle46 for sharing his #SuperBowl moment with the surviving family of an American super hero. What a wonderful way to honor SGT LaMar's life & carry on his love of spending @NFL Sundays watching all the games surrounded by family, friends, & snacks. #SuperBowlLIV https://t.co/20E2ieS5O1

Kittle has partnered with two organizations, USAA and the Tragedy Assistance Program for Survivors, that support the military community and their families. These programs have also worked with other players from around the league to get other members of the military and their families to this year’s Super Bowl, including Christian McCaffrey and Von Miller.

Semper Fi SgtMaj Luis Leiva at Camp Lejeune! Thank you for nearly 30 years of service to our country and being part of the best defensive team I've ever seen. Proud to present 2 tix to #SBLIV on behalf of @USAA & @MCA_Marines. #SaluteToService pic.twitter.com/so8jqkAb0R

Look who's going to Super Bowl LIV! Awesome to be working with @USAA again and send Marine Corps vet - and @Broncos fan - Nick Lopez to the big game with the help of the @VFWHQ. Thankful to all those who serve and their families who support them! pic.twitter.com/OldDVa3VIl