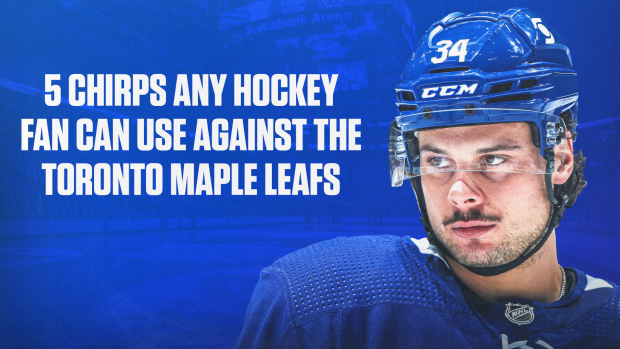 The best chirps to use against the Toronto Maple Leafs

Sorry Leaf fans but if you thought you were going to get out of this one you thought wrong.

No Canadian NHL team is safe!

We all know that Toronto has some of the most passionate fans in the North Division so before we get into it, let us say one thing: don’t take this too seriously! Be able to laugh at your favourite team’s mistakes. With that said, we can already hear Leaf fans getting angry from reading this article.

Enjoy these five chirps that any hockey fan can use against the Toronto Maple Leafs:

Never underestimate the Leafs ability to choke in the first round. Since 2006, the Leafs have only made the playoffs four times and have lost in the first round each one. In fact, they lost three years in a row in the first round from 2017 to 2019. It’s not like they don’t have what it takes either. Toronto is a solid highly skilled team that is more than capable of winning the cup.

I'm glad I stayed up late to watch the Leafs complete the choke job.

You probably saw this one coming! If you ever want to quiet a Leafs fan just say the magic number. Their 53-season drought between championships is currently the longest in the NHL.

The hockey hall of fame was built in Toronto so maple leaf fans can see what the Stanley cup looks like pic.twitter.com/XsA9ucgKVK

Speaking of 1967, the last time the Leafs won the Stanley Cup was when there were only six teams in the NHL. The original six consisting of the Toronto Maple Leafs, Montreal Canadiens, Boston Bruins, Detroit Red Wings, Chicago Blackhawks and New York Rangers made up the NHL for 25 seasons between 1942 and the 1967 expansion season. Don’t try and tell us it’s the same thing as winning the Stanley Cup in 2021!

4. “They lost to a Zamboni driver as a goalie”

This fresh chirp has to be our favourite. Remember when Toronto was playing the Carolina Hurricanes and they had to resort to their emergency backup goalie? We mean, how could we forget? It was only one of the most hilarious games to go down in TML history. The Canes pulled out David Ayres, a 42-year-old zamboni driver to go in net and it went WAY better than anyone could have imagined. Can someone please explain to us how the Canes still won 6-3? We're still laughing!

Leafs fans when Toronto has a big lead and there's a potential Emergency Back-Up Goalie situation developing in Ottawa. pic.twitter.com/Q6JJ3ynNFk

An oldie but a goodie! If you don’t know the movie Titanic, you might live under a rock. We all know the beautiful ship hits a glacier, sinks and kills almost everyone. Well, sometime after the movie was released some genius thought of the brilliant idea of linking the movie to the Leafs struggles. Toronto is known for being one of those teams that always look GREAT on paper but somehow finds a way to underperform when the time comes.

@wheelsoffire the difference between the leafs and the titanic... pic.twitter.com/19KYso7q