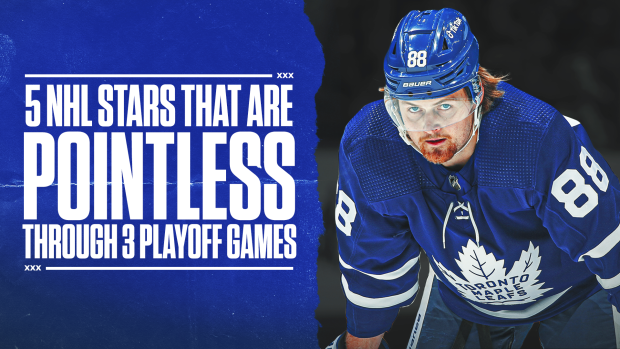 Anybody that has been around the hockey world for long enough has heard these three words spoken a number of times: “Playoffs are different.”

Throw out anything you thought you knew about the regular season, because playoffs are a different beast. Teams that dominated the regular season are certainly not safe from a playoff collapse, and the quest for the Stanley Cup can also make heroes when you least expect it.

Now that we’re three games into the NHL playoffs, we’re taking a look at the snack-size sample and identifying which players have not yet found their stride. While three game pointless streaks are not uncommon, you can bet that teams and fans are expecting a little bit more out of these players.

In fairness to Willie Styles, he was apparently dealing with a bout of food poisoning in Game 1. The effects of some bad sushi could potentially be lingering, even if the food poisoning itself has passed.

Nylander has been buzzing around the net for a lot of the series, but in a three-game stretch where the Leafs have scored 13 goals, you would think that he would have been involved on at least one of them.

Regarded as one of the most savvy pre-deadline acquisitions of the year, Tyler Toffoli’s success to close out the regular season has not translated into point production in the playoffs.

While some may argue that Toffoli isn’t the same caliber of player as a guy like Nylander, he only had four stretches of three games where he didn’t record a point all season long. And remember, he spent the majority of the season playing on Montreal who only scored 221 goals all year. Only the Flyers, Kraken, and Coyotes had less.

It’s no surprise there are multiple players competing in the Calgary Flames/Dallas Stars series to be listed here. A 1-0 Game 1 and a 2-0 Game 2 will do that.

Jamie Benn isn’t nearly what he used to be in terms of point-production. He only put up 46 points this season, but you would still expect the gritty captain to step it up in playoffs. He’s the prototypical player for playoff hockey, but unfortunately for the Stars it hasn’t quite translated. Luckily for them, Joe Pavelski has.

While it’s true that the Colorado Avalanche are the far superior team to the Nashville Predators, you would still expect a little more from Preds star Filip Forsberg.

Forsberg put up 84 points in just 69 games this year. He only had 18 games in total in which he didn’t record a point, he only had one three-game stretch without a point, and he entered the playoffs on a 8-game point streak in which he recorded 12 points total.

In three games against the Avalanche during the regular season, Forsberg put up 5 points and didn’t go pointless in any of the three games. But again, playoffs are different!

Andrew Mangiapane scored 35 goals in what proved to be a breakout year this season. Unfortunately for Calgary, he has been unable to light the lamp in three playoff games so far.

The line of Toffoli, Mangiapane, and Mikael Backlund has been stone cold with zero combined points, and the lack of production from this line is one of the main reasons why the heavily favourited Calgary team finds themselves in a 2-1 hole against the Stars.