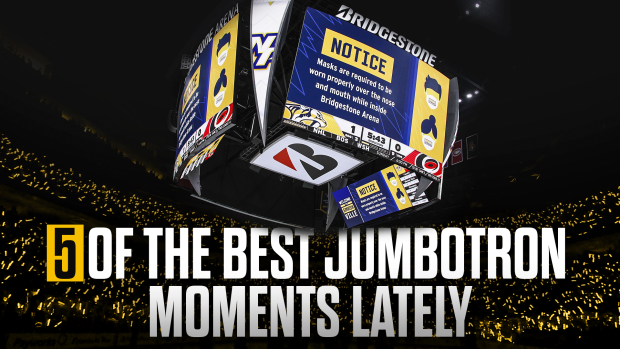 The Jumbotron is one of the most underrated things at hockey games.

When you hear someone talk about their experience when they go to one, the conversation probably consists of the food, atmosphere, crowd and game of course. In our opinions, the jumbotron is not nearly talked about enough.

We completely understand that the jumbotron is only as good as the person that uses it. With that said, there are some pretty hilarious moments on the big screen that will go down in history.

NHL teams have been stepping up their jumbotron game lately and we are here for it!

The Kiss Cam has to be one of the most iconic segments on the Jumbotron at live sporting events. While it’s usually hilarious, it can either be really great or really bad. This Flyers fan had a pretty unlucky experience with hers.

Getting to go on the jumbotron is every kid’s dream when they attend a hockey game! This young Red Wings fan got all of that and more while watching the Red Wings against the San Jose Sharks at Little Ceasars Arena. The Camera went back and forth between showing the young Detroit fan and random sharks fans. It was pretty clear who the star of the show was.

The look-a-likes segment has quickly become a fan favourite. First of all, it’s usually pretty accurate. Second, it’s insane to see these hockey fans doppelgangers side by side!

The Stars might just be the most ruthless team in the NHL for this. They completely took advantage of random fans on their phones and didn't hold back.

We had to add another look-a-like segment just because we love it THAT much. This one is a little bit more ruthless though. It started off pretty wholesome with the first one, but then went from 0 to 100 pretty quickly after that.