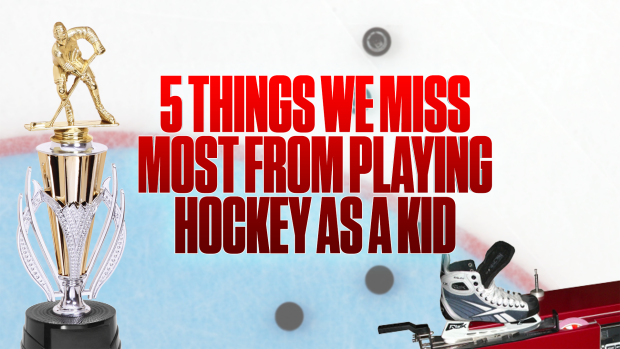 Which of these 5 things do you miss most?

Think back to when you were a hockey player as a kid… so many fond memories, but which stand out above the rest? This, of course, led to a massive conversation at BarDown’s headquarters and it didn’t take long before we came up with a list of our favourite things we miss from playing hockey as a kid. We won’t waste any time here, so without further ado…

There was a time when hockey mats were used for more than just keeping your feet dry. They were actually considered pretty cool! To the point where you could them custom made at birthday parties and Bar Mitzvahs. Not really sure what happened but they kind of just stopped being a thing anymore. That said… they took up a lot of space in hockey bags!

4) PLAYER OF THE GAME AWARDS

Who knew a small piece of paper could mean so much? A player of the game certificate usually included a free pizza at Boston Pizza. What a time to be alive.

Who could forget those notorious white, blue and pink colours… and that classic handwriting? Best part is that your skates would often come out more dull than they were before they went in. Everyone comes to the realization after the age of seven that those machines are truly not to be trusted if you wanted a proper sharpening.

Not the super long ones. The road trips that were just outside if your hometown. Winnipeggers, for example, used to routinely rip Fargo, North Dakota for a nice weekend trip. Never a dull moment!!!!

Why throw your tape away when you can just build a massive ball with it? Sure, it might make your hockey bag 20 pounds heavier, but the end result is totally worth it… or is it?! Tell that to mom or dad, who has to carry their kid’s bag to and from games and practices.

So… which of these do you miss most from playing hockey as a kid?!