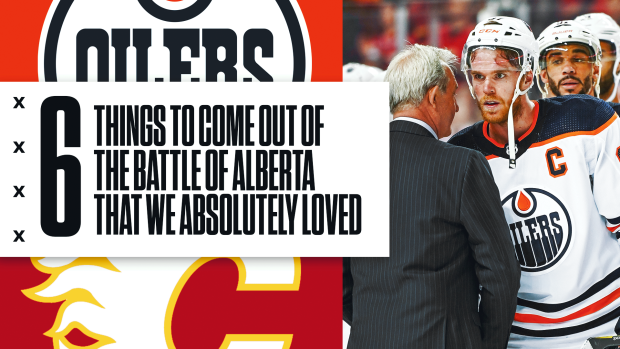 And just like that, the Battle of Alberta has reached its completion.

The Edmonton Oilers finished off the Calgary Flames with an overtime win in Game 5 to secure the 4-1 series win. While 5-game series usually aren’t the ones you write home about, the Battle of Alberta was different. It absolutely lived up to the hype.

Game 1 set the tone with 15 goals split between the two teams, but Edmonton went on a run of four straight wins to finish off the series early. This series had it all, but we’ve boiled it down to SIX things that we absolutely loved out of this series.

1. Connor McDavid fully living up to potential (and Leon Draisaitl!)

Connor McDavid was nothing short of incredible in this series, recording 12 points in just five games. Leon Draisaitl was even more present on the stat sheet, scoring 17 points in those five games.

It’s never been a secret that the Oilers run through their two superstars, but never more so than this series. We give McDavid the spotlight because, well, anyone that watched the series knows why. He is an absolute wizard with the puck, and it seems like every time he touches the rubber he’s pulling some other-worldly move to shake defenders.

Even Flames head coach Darryl Sutter gave credit where credit was due.

“The best player won the series for them.” pic.twitter.com/w6hMV2mYul

Beyond the stats, it’s been nice to see a different McDavid this postseason. One capable of showing A LOT of emotion.

Similarly to how Laila Anderson stole our hearts during the St. Louis Blues miraculous run to a Stanley Cup title in 2019, Ben Stelter is doing the same during Edmonton’s run.

The now six-year-old Ben is undergoing treatment for glioblastoma, a type of brain cancer. The recognizable youngster has proved to be a good luck charm for the team, and the Oilers organization is fully embracing him.

The Oilers were even able to deliver a berth in the Conference Final as a birthday gift!

Well would ya look at the time. It's our buddy Ben's 6th birthday! 🎂

When you see the Oilers win and everyone online requesting La Bamba to be played, you know why.

Darryl Sutter has always walked through life with a dry wit and a unique persona, but he really came into his own during the Battle of Alberta each and every time he sat down in front of the microphone.

Here are a few examples of Darryl being Darryl:

Darryl Sutter is absolutely flying up the “wholesome presser” rankings these days. 💘 pic.twitter.com/n2WUd4wnkD

"You know, I think that puck could go in the net"

“They called it charging, correct? Could you imagine if Looch did charge?”

Darryl Sutter on the disallowed goal in the 3rd period. pic.twitter.com/vst4HQxae8

Some people may like goaltender duels, but it’s safe to say most people prefer scoring. And oh boy, did we ever get scoring in the Battle of Alberta.

Game 1 set the tone, with Calgary’s nine goals besting Edmonton’s 6 goals. All game long, it felt as though no lead was safe; particularly after Edmonton battled back from being down 5-1 to tie it up 6-6. This game was crazy, but it wasn’t even the craziest scoring feat of the series!

In Game 5, the two teams traded goals in the 2nd period seemingly at will. In the span of 1:11, four total shots were taken – two by each team – and all of them went it. That’s the fastest 4-goal span in Stanley Cup Playoff history.

This point about controversy may be controversial in itself, because if you ask any Flames fan they would MUCH preferred to have gone controversy-free. In fact, we may be gearing up for Game 6 if we had.

Regardless, we’re including the incredibly controversial overturned goal in Game 5 based solely on the fact that it is, if nothing else, undeniably entertaining.

Any time something like Blake Coleman’s disallowed goal happens, everybody and their dog has an opinion on it. It adds to the overall  interest, and deepens the series story. Unfortunately for Calgary (and all of us enjoying the Battle of Alberta), it very well may have cost the Flames another shot at the Western Conference Final.

After the game, you knew people weren’t going to forget.

Coleman on his disallowed goal:

"I don't think I understand the rule. [I was] getting pushed, just trying to keep my foot on the ice…I felt like I was in the battle. My understanding is you can direct the puck, but you just can't kick. I didn't feel I kicked it."

There’s nothing new here, as friendly wagers are commonplace when it comes to playoff series, but we love them nonetheless. For the Battle of Alberta, Canada Soccer Men’s National Team members Alphonso Davies and Sam Adekugbe decided to represent their hometowns.

Of course, it was Davies who ended up winning the bet, and he let Adekugbe hear about it.

That wasn’t the only wager that was made. The Calgary and Edmonton mayors also decided to get in on the action!

🧵 We have been waiting for this moment for so long, and FINALLY, the #BattleofAlberta is upon us! 🤩 ⁣
⁣
Mayor @jyotigondek and I have placed a friendly bet on this series, but I have absolutely no doubt that the @edmontonoilers will come out on top. 🏆 #YEG #LetsGoOilers pic.twitter.com/KIMJOr18XO

In the end we only have one wish, let these two teams play in playoffs every year… please!