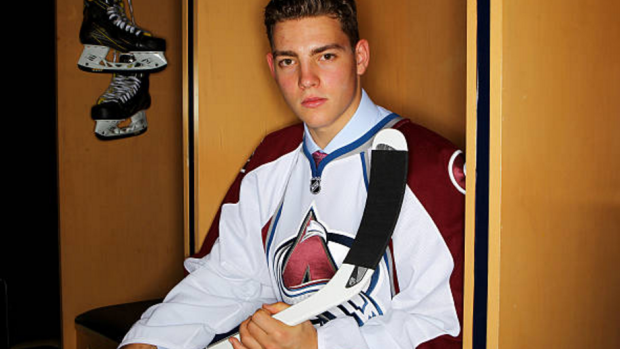 The NCAA basketball tournament, also known as March Madness, isn't the only big college tournament going on this month.

On Friday, the road to the Frozen Four begins as the NCAA Hockey Tournament gets underway.

Although it's college hockey, fans of every NHL should be paying close attention as prospects from pro teams and upcoming draft prospects will be showcasing their abilities in the hopes of helping their team win it all.

With there being so many players, though, it's difficult to know who to watch, which is why we compiled a list of 8 first-round picks to keep an eye on in the tournament.

Avalanche fans and Canucks fans have to be upset that their teams are officially out of the playoff race, but watching Tyson Jost and Brock Boeser should bring their spirits up.

Jost, a first-round pick in by the Avs in 2016 (10th overall) and Boeser (23rd overall pick in 2015 by Vancouver) will try and lead North Dakota to back to back championships.

A 25th-overall pick in the 2016 draft by the Dallas Stars, Riley Tufte will try and help the number two team in the tournament reach the frozen four.

The first-round picks highlighted here aren't the only players to watch, though.

.@UMDMensHockey's Alex Iafallo is the looking to lead the Bulldogs to their first Frozen Four since winning the national title in 2011. pic.twitter.com/0qi7clV4lt

.@OhioState_MHKY's Nick Schilkey is third in the nation in goals scored and the leader among players in the tournament in goals per game. pic.twitter.com/uJ31VkFxUg

The hero of @usahockey's gold-medal winning world junior team leads @DU_Hockey, who enter as the No. 1 overall seed. pic.twitter.com/ijiQqtcMG1

The Moscow, Russia native and @PennStateMHKY star has scored more points than any other freshman in the nation. pic.twitter.com/r0Jkb4usLQ

The @NHLBruins draft pick is one of the top scorers on a @Harvard_Hockey team that leads the nation with more than four goals per game. pic.twitter.com/H8rWuD86e3

The freshman phenom from @mtuhky is second in the nation in goals-against average and tops among goalies in the tournament. pic.twitter.com/8dZEeMQVLZ

The Big Ten's MVP looks to lead @GopherHockey back to the #FrozenFour for the first time since 2014. pic.twitter.com/URUrHUJdCH

.@NDHockey's Cal Petersen has the most career saves and shutouts of any goalie in the tournament. pic.twitter.com/D57mnZmIy6

The brightest stars of tomorrow shine in the NCAA Hockey tournament this weekend! @Unionmhockey's Mike Vecchione leads the nation in ppg. pic.twitter.com/rQcGaGiMMg

We're excited for the tournament, which begins Friday afternoon.