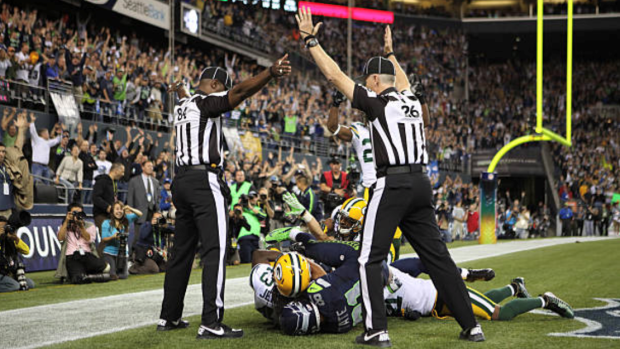 The replacement refs incident the NFL faced in 2012 seemed like it was just yesterday, but it has been a long 8 years since one of the worst officiating weeks in football. All of the mistakes so far that season built up to one epic night during Monday Night Football.

The Seattle Seahawks were hosting the Green Bay Packers at CenturyLink Field on September 24th, 2012. Both teams had been fed up by the officiating headed in the 4th quarter, but things got worse down the stretch.

First Packers linebacker Erik Walden was called for a weak roughing the passer call on Seahawks quarterback Russell Wilson after he threw an interception.

Before the Fail Mary happened, Russell Wilson had this 4th quarter interception wiped away by a brutal roughing the passer call pic.twitter.com/6d2gonxF9c

As if that wasn’t bad enough, the officials call cornerback Sam Shields for pass interference although he is clearly being held by Seahawks receiver Sydney Rice.

Another horrific 4th quarter PI call that had Jon Gruden heated about the refs before the Fail Mary even happened pic.twitter.com/uOU8B1b7Uk

To top it all off, the cherry on top, the Pièce de résistance of this night was on the last play which is infamous with this replacement refs fiasco is a Hail Mary toss from Wilson which is called a touchdown and an interception? AKA the Fail Mary.

One of the weirdest moments in sports history thanks to replacement refs that couldn’t get a job at the YMCA: the Fail Marypic.twitter.com/ld8U5TS5vK

The Seahawks ended up winning the game with a touchdown and we sure are happy the NFL fixed its officiating problem that year.