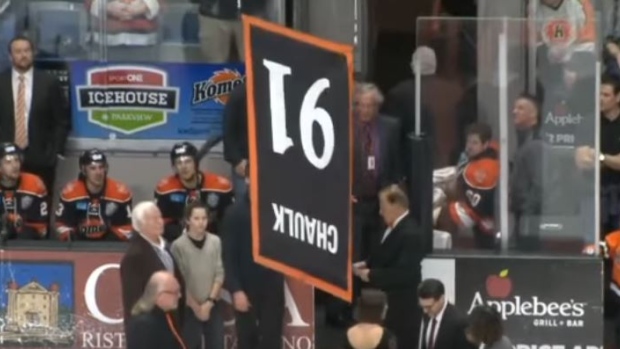 The ECHL’s Fort Wayne Komets hosted the Brampton Beast on Saturday night. Prior to puck drop, the Komets honoured longtime Komet Colin Chaulk before the game by raising his No. 91 into the rafters. However, things didn’t exactly go as planned.

We’re guessing that someone got in a lot of trouble later that night. However, as bad as it was that the banner was hanging upside down when they unveiled it, they didn't make things any better by raising it to the rafters anyways.

They have probably made the changes by now, but you’d think they would have given Chaulk the proper ceremony that he deserved, especially in front of the largest crowd of the season.

According to GM David Franke, it was “the most embarrassing thing I’ve ever been part of in 27 years with the club.”

Chaulk spent 10 seasons with the team and spent time with them while they were part of the IHL, UHL and now ECHL, before retiring from hockey after the 2012-13 season.