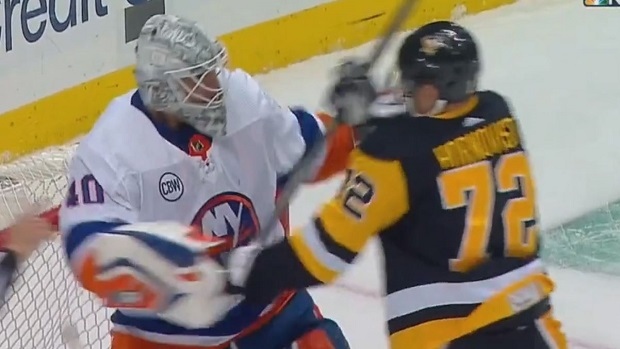 Playoff season is a tense time, no matter what sport you’re watching, and things get even more intense when a team is on the verge of elimination.

The Pittsburgh Penguins entered Tuesday night’s contest against the New York Islanders in desperate need of a win as they went into the contest down three games to none and you can tell they were willing to do whatever it took to stay alive. Midway through the second period we saw two players exchange some shots and it was two unlikely players.

Patric Hörnqvist didn’t appreciate the slashes he got from Robin Lehner and decided to give the Islanders goalie some shots of his own.

However, the netminder wasn’t having any of it and held his own until the rest of his teammates jumped in.

Robin Lehner would kick Hornqvist’s a$$ and that would end up just like Ovie and Svechnikov last night.