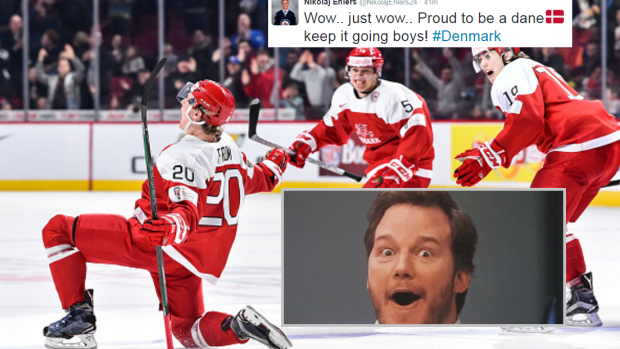 Denmark was a total underdog coming into the World Juniors, but things have quickly turned around.

In their first game, they defeated the defending champion Finns and, today, defeated Czech Republic 3-2 in overtime with a beautiful goal from Blackhawks prospect, Mathias From.

He has been a star in this tournament, on and off the ice, as he was the player in the suit spraying the visor cleaner in the Danes’ popular celebration after their first win.

Denmark took the celebration to the next level after they held on to defeat defending champs Finland. #WorldJuniors

Now, after all of these great moments, people have started to really get being the Danes, hoping they are the Cinderella team of this year’s tournament. First off though, is someone who was cheering them on all along – Denmark NHL star, Nikolaj Ehlers.

Wow.. just wow.. Proud to be a dane🇩🇰 keep it going boys! #Denmark

Mathias From-CHI dangles Filip Hronek-DET to get Denmark an OT win and 2nd place in the group.

We are all Denmark 🇩🇰 #WorldJuniors https://t.co/qXdzY8657R

🏒If you're a hockey fan this is pretty exciting. I'd love to see Denmark turn into an @NHL player factory. 🏒 https://t.co/WcYHBPkw7O

Denmark’s win over Czechs guarantees them a spot in the quarters. One of Finland/Switzerland will play one of Latvia/Slovakia in relegation.

If I'm a kid in Denmark looking for a sport to play, this influences my decision https://t.co/G7hUJVc0AZ