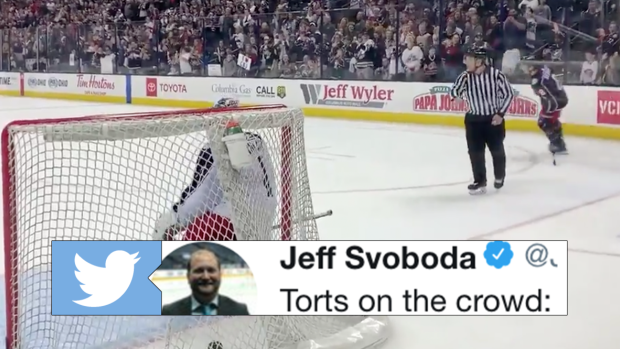 The Columbus Blue Jackets are entering uncharted territory.  Thanks to a sweep over one of the best regular season teams of all-time, Columbus is in the second round of the playoffs for the first time in franchise history.

Part of what makes playoff hockey great is getting a first-hand look at just how much some of these cities that don't get a lot of attention actually love hockey and Columbus is undoubtedly one of those places.

Would have to guess around 5,000 here for this scrimmage, based on the sections that are open. #CBJ pic.twitter.com/eq1vWfwf2y

The Blue Jackets held a team scrimmage Monday and over 5,000 fans came out to watch their team.

Zach Werenski scores to win the shootout and Kinkaid throws his stick at him. A good time had by all. #CBJ pic.twitter.com/FKcw6YWpd4

You think they're excited to be playing playoff hockey still?

Crowd applauds the #CBJ after the scrimmage. 5,200 here to watch the Jackets. pic.twitter.com/8x3hO1BKzY

After both home wins over Tampa Bay, the players acknowledged the impact the crowd had and how awesome the atmosphere they helped create on home ice was.  Torts echoed that same message after the scrimmage.

Torts on the crowd: “5,200 people — does anybody work? ... I’m excited to be part of a city that’s so behind us here.” Glad the players saluted the crowd afterward. #CBJ

"You can sense it in the city. It's exciting to play when you know the city is behind you." - @18Dubois feels the love. #CBJ pic.twitter.com/D4OCeZo1sW

Columbus awaits the winner of the Boston and Toronto series, which ends on Tuesday night in Game 7.