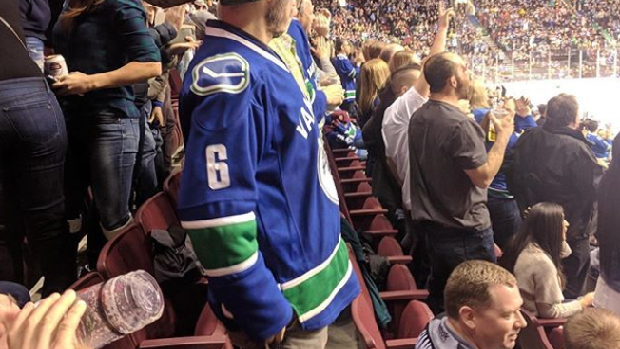 A Vancouver Canucks fans watches his team in action. , r/Hockey

It’s been another year of hardship for the Vancouver Canucks, who find themselves near the bottom of the Pacific Division standings for a second consecutive season. The team ranks 27th in goals for and have allowed the second most goals against ahead of the New York Islanders and Ottawa Senators. Luckily for their fans, the solution to their troubles could come in the form of a first overall pick this June.

All bottom dweller’s eyes have been on Swedish league defenceman Rasmus Dahlin. The 17-year-old has already been compared to Ottawa Senators defenceman Erik Karlsson and was selected to compete for Sweden at the 2018 Winter Olympics. During last night’s home loss to the San Jose Sharks, a fan made his desire for the team to tank very clear by wearing a hat shaped like an army tank. The text made the accessory all the better.

Spotted in Vancouver on Saturday night. #Canucks . (📸Via: Reddit/Hockey)

It’s just been that kind of season for the Vancouver Canucks.

Things weren’t all that bad for the team when you consider they were able to snap a three-game goalless drought in the loss. The 5-3 defeat dropped them to third last place in the league with just 59 points.

Timo Meier scores twice, including the winner, to lead the #Sharks to a 5-3 victory over the #Canucks. https://t.co/lAAy61ifZA pic.twitter.com/P1Pb06xSfy

The Canucks have been lackluster at best over the past few seasons but have an arsenal of prospects who could help turn things around. Their future includes youngsters Brock Boeser and Bo Horvat along with defensive prospect Olli Juolevi, forward Jonathan Dahlin and goaltender Thatcher Demko. Adding a player of Rasmus’ caliber should accelerate what might be a lengthy rebuild.

Some more ridiculous dangles from Rasmus Dahlin? Why not 👀. . Tag a friend who also has crazy hands. . (Via: C More Sport Twitter)

As the season winds down, we’re sure this brave fan won’t be the only one hoping for his team to lose out. The lottery is quickly approaching so time will tell if they’re able to snag the number one spot.