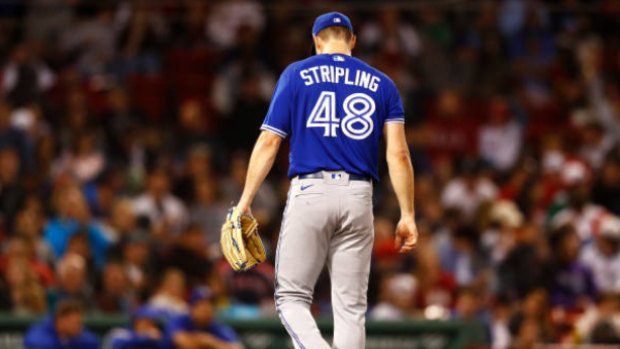 Baseball is a game of moments. Each play typically last just a few seconds, but in that few seconds a LOT can happen.

A ball can sail over the outfield fence. A runner can stretch a double into a triple. An outfielder can show off their arm with a frozen rope to the plate. And, of course, errors can occur.

It was a few seconds of madness on Wednesday evening that ended up creating a visible outburst from Toronto Blue Jays starter Ross Stripling. A slow roller to 3rd base was looking like it was going to be a close play at 1st, so Jays’ 3rd baseman Joe Panik decided to bare hand it.

He got the ball, but his toss to 1st air-mailed, causing an outburst from Stripling.

I hate this. Never show up your defenders. Ever. pic.twitter.com/81ltO6BrTj

Baseball is an emotional game, and following the game Stripling shared a message expressing regret for the incident, and whole-heartedly owned up to the mistake.

Agreed. Completely embarrassed about it. Apologized to Joe individually and the team. Will never happen again

Young ballplayers, be better than this. https://t.co/bjUyVLulv1

It doesn’t get much more genuine than that. For the most part, it seems like even Twitter has forgiven him.

Perfectly handled @RossStripling Always be willing to hold yourself accountable and admit you were wrong. #respect https://t.co/jSCvtEqhuc

Love the compete and the passion. Also love owning going over the line. Great job addressing it on the bench right away and publicly after the game. Well done @RossStripling https://t.co/6fNMgzgbNH

Everyone who has ever played sports (whether it’s professionally or when you’re getting your ass kicked in backyard football) has lost their temper. Owning it and admitting you were wrong is the only rare thing about this whole interaction https://t.co/YMCypul7s5

Love Ross owning this. Nobody's perfect. Can only control how you move on from mistakes. A poor example turned into a great example. https://t.co/7vakWKZQuU

Respect to Stripling for just owning up to this. In his defence, he was expressing the emotions of the Blue Jays fan base. https://t.co/A96Xy9SEdJ

Manned up & apologized - I respect that https://t.co/Hg5nL4IiLj