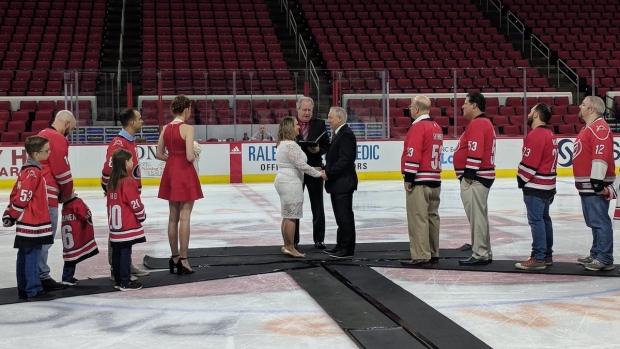 Not all weddings happen at a church or at a majestic location with a picturesque backdrop. You may remember that Britney Spears once got married for 55 hours a drive-thru Wedding Chappel in Las Vegas.

You could google some of the oddest places to get married, and there’s a good chance that a hockey rink wouldn’t come close to touching that list.

Well, that is until now. Prior to Saturday’s game between the Flyers and Hurricanes in Raleigh, one couple decided to tie the knot in an empty PNC Arena. Robert England made it official with his now-wife Lisa in front of a few special friends and family members.

Instead of dresses and tuxedoes, Hurricanes jerseys were used as wedding attire.

We are gathered here today for an on-ice wedding @PNCArena! pic.twitter.com/Cav20twbzl

According to NHL.com and Fox Sports Carolinas, Robert has pledged his hockey allegiance to the ‘Canes since the team moved from Hartford back in 1997. Shortly after they began dating, Rob introduced his girlfriend to the sport.

"When I proposed to her, I said what do you think about getting married on the ice at the arena?" Robert told Fox Sports Carolinas. "And she was like 'let's do it!'"

Just about everything was smooth sailing at the wedding, except for the fact the Hurricanes blew two leads and fell to the Flyers 4-2.

But in the grand scheme of things, the outcome of the game won’t matter compared to the notion of a happily married couple that will (hopefully) share their love for each other and for the game of hockey for the rest of their lives.