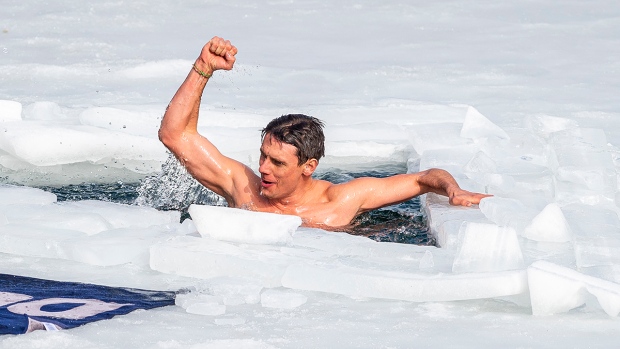 As Canadians, we like to pride ourselves for being pretty well-adjusted to the cold.

This is a totally different ballgame, though.

Over in the Czech Republic, free-diver David Vencl set a new Guinness World Record by swimming 80.9 metres under ice, requiring a minute and 35 seconds to complete the feat. For context, an Olympic-size swimming pool is 50 metres in length.

As conditions for the record to be acknowledged, Vencl could not use a diving suit, cap, weights or fins. Additionally, the thickness of the ice had to be over 30 centimetres.

Czech freediver David Vencl has set a new Guinness World Record for the longest time a man can swim under ice. Vencl swam 80.9 metres (265ft) in one minute and 35 seconds at a lake in Lahost, northern Czech Republic. @GWR #freediving

We’re frigid just from staring at this photo. We can handle the cold, but we weren’t made for this!

The previous record was set in 2013 by Stig Severinsen, who swam 76.2 metres under ice.