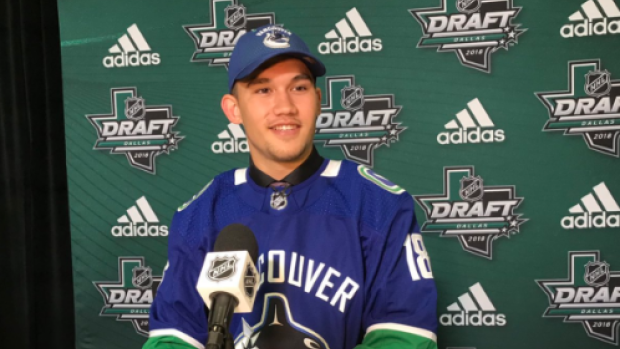 Needing to address their most pressing need, the Vancouver Canucks took three defenceman with their first four picks at the 2018 NHL Draft.

After selecting Quinn Hughes from the University of Michigan with their first round pick, the Canucks took Jett Woo from the Moose Jaw Warriors at 37th overall in the second round, who just happens to have the best name out of anyone picked in the draft.

Woo is half-Chinese, and made history by becoming the second-highest pick in NHL history with a Chinese background. Josh Ho-Sang is the highest after being taken 28th overall by the Islanders at the 2014 Draft.

Wow, what a feeling. Very blessed to share this moment with my family and friends! #Canucks pic.twitter.com/jevIvEICjR

Woo’s father Larry, a former WHL player, grew up in Winnipeg after his parents immigrated from China; his mother comes from German descent. Any hockey player will tell you about the scrafices their family members made to help them achieve their goals of being drafted into the NHL, so it was only right that Woo had a big group in Dallas to support and congratulate him.

Hugs and tears as @Jett_Woo sees his family after being drafted. #NHLDraft pic.twitter.com/e5QOQBc6Iz

"To have all that support in that way and to have my heritage with me in this process is something that's really pulled me into learning more about my heritage and my family and it's something really special, Woo told NHL.com's Mike Morreale on Day 2 of the draft in Dallas.

Born and raised in Winnipeg, Woo understandably has several family members that support the Winnipeg Jets, although that could change in the coming future if he’s able to one day lock down a full-time NHL roster spot with the Canucks.

One of his relatively has one of the coolest customized jerseys you’ll ever see. It features the Jets’ logo they wore from 1979-90 with the airplane instead of a puck next to a stick that was the “J" in Jets.

The "Jets" portion of the logo was replaced with “Jett” with Winnipeg being swapped with Woo.

Pretty cool, eh? Oh, and did we mention he was named after Jett Li?

A defence first type of player, Woo is known to dish out big hits, and got the Warriors fans to yell out Rick Flair's signature "Woo" whenever he would dish out a blow.

The 17-year-old missed a portion of his draft season after being sidelined with separated shoulder, and then a strained oblique muscle and hip pointer. Limited to only 44 games with the Warriors, Woo managed to produce a respectable nine goals and 25 points in 44 regular season games, before adding another three points in 14 playoff games.