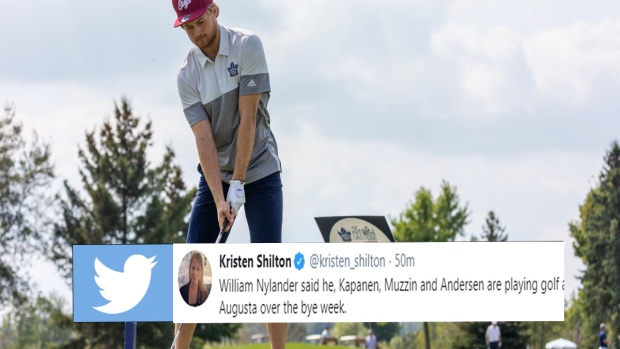 Bye week is a relaxing time for most NHL players.

It's not uncommon that they'll take some fancy vacations to unwind, but what a few Maple Leafs have planned for their bye week is next-level.

You can't keep sports guys away from sports, and a few of the guys from the team will  be doing some golfing in their time away from hockey. This sounds pretty laid-back, barring the fact that they're golfing at none other than Augusta National.

William Nylander said he, Kapanen, Muzzin and Andersen are playing golf at Augusta over the bye week.

Not a big deal.

Regarded as one of the most elite courses in the world, the course in Augusta, Georgia, is incredibly tight-lipped when it comes to the cost of memberships, who's a member, and pretty much everything else. From what we gather, the one-time initiation fee that members pay costs between $20,000 and $40,000. From there, the annual fee is rumored to be about $4,000.

As far as playing a round goes, we can't find any sort of numbers. Probably because that doesn't really exist. Getting onto the Augusta fairway is one of the toughest feats in sport, and to play a single round, the guys would have to be with a member.

Which begs the question: who is the member bringing the hockey guys to Augusta?! Or did one of them foot the membership fee and somehow get accepted?!

We're looking at Willy with that big contract, though.