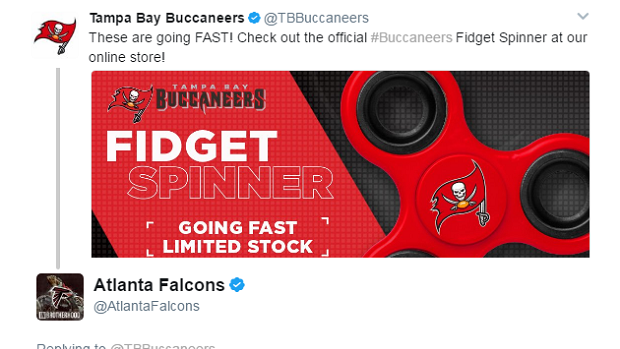 Fidget spinners are a polarizing topic in today’s world, which is sad, but painfully true. Some people really hate them, some people will not stop playing with them.

We’re on the side of “They’re kind of fun, but who cares”, but that seems to be a rare opinion. They have even started some fights in the NFL, as two teams got into it on Twitter over the promotion of a team-branded spinner.

The Tampa Bay Buccaneers tweeted out a promotion for their new Fidget Spinner (Technically, a stress relieving toy) and the Falcons question why they might need one.

These are going FAST! Check out the official #Buccaneers Fidget Spinner at our online store!

Of course, the easy way out of a Twitter fight with the Falcons is by referencing their blown lead in the Super Bowl.

In case you missed the jab, it’s the numbers on the jerseys. It’s over (This Twitter battle), folks.