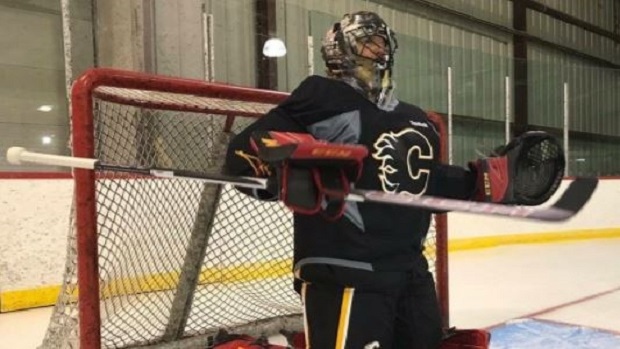 As we inch closer to the start of the NHL season, we’re starting to see players debut some of the new gear they’ll be using this coming season.

Equipment junkies always look forward to this time of the off-season and it’s especially intriguing when he sees players switch teams, especially for goaltenders like Marc-Andre Fleury who debuted his new Vegas Golden Knights mask today at a CCM promotional photoshoot.

Fleury wasn’t the only one showing off his new cranium cage as Chicago Blackhawks’ Corey Crawford and Florida Panthers’ Roberto Luongo also rep CCM and showed off their new helmets.

Smith has experimented with darker coloured pads in the past, highlighted by this beautiful Reewhen the Coyotes went back to their retro uniforms.

The #Coyotes throwbacks are amazing, and every other opinion is wrong. pic.twitter.com/uJTWxQzT56

Check out #Flames' G Brian #Elliott's new gear for the upcoming season. All red everything. pic.twitter.com/dYgXOYgr59

Coincidentally, the now Philadelphia Flyer saw an uptick in his numbers when he ditched the red set.

What’s In A Pads Color: The Tale of Two Brian Elliott’s https://t.co/MCR4dZuWbX pic.twitter.com/juEcMctpqU

Elliott’s new set-up with the Flyers have leaked. He’s sticking with the white-styled set with a splash of orange. Sorry Philly fans, it doesn’t look like he’ll be rocking the all orange set-up this coming season.

Jonas Hiller, who spent two seasons with the Flames, had some pretty colourful Koho pads during his time in Cowtown.

While we sit and wait for Smith’s Flames mask to leak, here’s a flashback to the Hollywood-inspired mask he wore at the All-Star game that featured Wile E Coyote, and Harley Quinn from Suicide Squad.

JUST IN: Mike Smith's friend & artist @darrigoart created a helmet just for #NHLAllStar ⭐️. Check back tomorrow at 8:30 AM for more photos! pic.twitter.com/107BUtbFdW