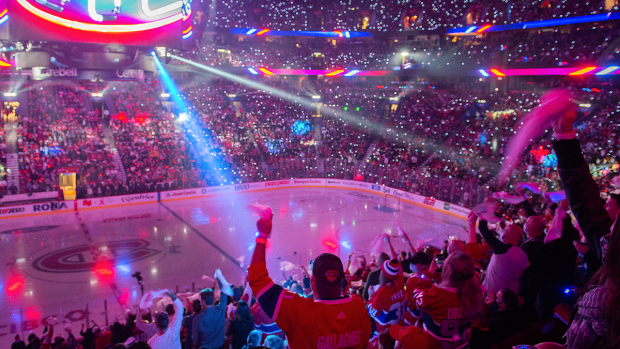 The 2020-2021 season was a glorious one for the Habs. Sure they didn’t win the Cup, but making the Stanley Cup Finals is no joke. Although the season was great, with the state of the pandemic, there were only so many people that could witness Montreal’s run in person. This year, the Canadiens will get a lot more live support from their fans.

For the first time in 585 days, the Montreal Canadiens played in front of a full crowd at the Bell Centre. You knew it would be electric but you almost forget just how loud an arena of passionate fans can be. It didn’t take long for Montreal fans to remind us.

Alongside the Stanley Cup run, Cole Caufield was a huge point of optimism for the Habs last season. He’s already a fan favourite and was met with a huge ovation as he was introduced before the start of the game.

He wasn’t the only one either as Jonathan Drouin was also given an incredible welcome in his return to the Bell Centre.

Although Shea Weber and Carey Price weren’t there for the Habs, they were still introduced on the jumbo-tron. Of course, Montreal fans were raining down the “Carey” chants.

Love hearing a Carey chant at the Bell Centre.#GoHabsGo pic.twitter.com/SGciS6bLVi

Regardless of who you cheer for, it’s great to see the rink full of fans again.