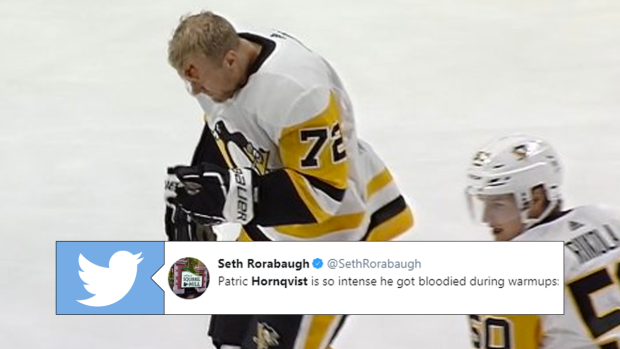 It is now mandatory in the NHL to be wearing a helmet at all times during a game, and even visors are becoming mandatory for a little extra protection. That’s only in-game, though. For warmups, feel free to kick it back to the 1940’s.

The philosophy is that NHL players are so good that they are not at risk of injury during warmups. This is mostly true, but Patric Hornqvist found out the hard way that safety is not set in stone.

The unfortunate forehead gash Patric Harnqvist received was made a little more embarrassing by the fact that he did it to himself. Approaching the net, the Penguins forward rings one off the crossbar, sending the puck on a redirection to his face.

Patric Hornqvist rings a shot off the crossbar in warmups and it hits him in the head pic.twitter.com/FcHLI0DHQy

Not exactly as cool as he’d hoped, we’re thinking.

Plays like this may make players rethink going helmetless for warmups, but luckily it didn’t cost Hornqvist any time.

Patric Hornqvist is so intense he got bloodied during warmups: pic.twitter.com/QcvR6b0bvH