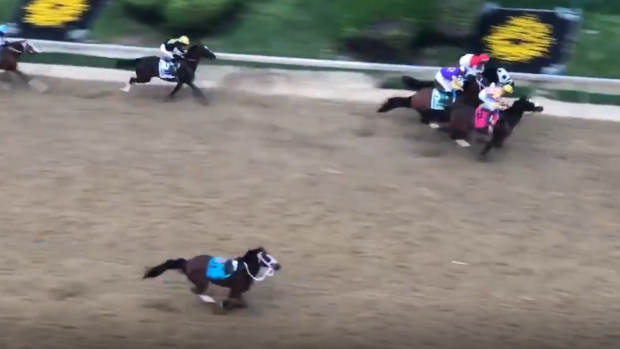 In an unusual twist at the 144th Preakness Stakes, a horse tried to win the race even without a jockey.

Right at the beginning of the race, Bodexpress bucked its jockey off, and proceeded to do the dang thing by itself. And, you know, it’s one thing for the jockey to get tossed, but props to Bodexpress to keep racing!

So much for an uneventful race. Bodexpress drops John Velazquez at the break. pic.twitter.com/y4IVVTOJjF

Bodexpress tossed his jockey right out of the gate at Preakness. Jockey is ok. Horse kept running pic.twitter.com/n9VdWrmbim

The horse with no jockey has a clear weight advantage #Preakness pic.twitter.com/CbjXDKN3wf

A rare sight at the Preakness. Jockey fell off in the beginning. Horse just by itself. pic.twitter.com/vfFDgOADb7

Bodexpress actually was able to pass a few racers near the finish line, although without a jockey, it'll go down in history as a did-not-finish.

War of Will was this year's Preakness winner, although the stakes were regarded as lower after Country House, the winner of this year’s infamous Kentucky Derby, did not race due to sickness. As a result, the possibility of a Triple Crown this year was over before Preakness even began.

It would’ve at least added some extra excitement had Bodexpress been able to win without a jockey, but you probably won’t see any jockeys complaining about that.

Good for jockey business that Bodexpress didn’t win without a jockey...