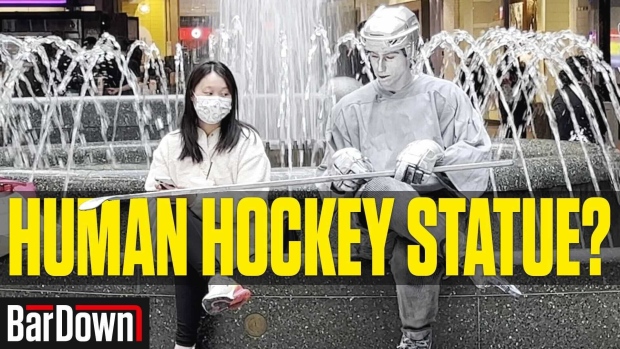 If you’ve been following BarDown for a while, you’ve likely become pretty familiar with Jesse Pollock. You’ve also likely discovered that his stunts know absolutely no bounds.

The unapologetic Winnipeg Jets super fan has been living in Toronto since attending university in the city, and he’s used most of that tenure to do as much as he can to terrorize Toronto Maple Leafs fans. He also… may be one? The jury is out on that, but it seems like he’s always got his fingerprints on all things Leafs – usually with a Jets jersey hanging from his shoulders.

During the 1st round of the Stanley Cup Playoffs, he traded in the Jets jersey for a spray painted set of hockey equipment – accompanied by a full body-paint coating that Tobias Funke would be proud of – and made his way around different Toronto locations before arriving in the belly of the beast: Maple Leafs Square.

What was he doing there? You guessed it, he was looking for all the smoke from Leafs fans.

Not sure how well he did in baiting Leafs fans to chirp their own team, but he definitely received a fair number of chirps himself. In a different video, you can see him fending off the Leaf fan ire in a not very statue-like manner.

It would seem as though he was eventually banned from the fan area, but luckily he was able to find some other statues to hang around with.

One of those statues is not like the other.

In case you were wondering where Jesse got all the equipment, he went on a little bargain hunt for the necessary materials.

What chirp would you throw at Jesse? Let us know @BarDown!