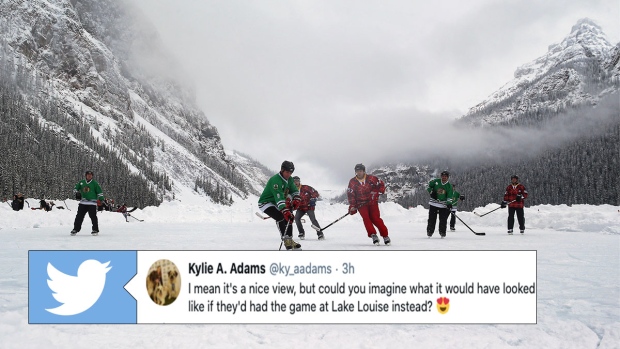 It’s the eve of the highly-anticipated NHL Outdoor games at Lake Tahoe, and from what we’ve seen so far, the views have been nothing short of spectacular.

It's happening!! #NHLOutdoors at Lake Tahoe begins at 3 ET this Saturday on @NHLonNBCSports and @Sportsnet.

Though it seems like doesn’t get much better than this, a lot of Canadian fans are convinced that it actually could.

‘Lake Louise’ is currently trending on Twitter, and it has a lot to do with Canadian hockey fans thinking the natural wonder would have been the superior choice for the outdoor games.

These views? That settles it. They've got to do Lake Louise. https://t.co/SKDThiTdSn

Why Lake Louise, AB would have been better. pic.twitter.com/8kDnD91vWa

I vote for Lake Louise next time pic.twitter.com/WfXV2mcROO

Best pic/view so far but still has me dreamin’ about what coulda shoulda woulda been at Lake Louise..... https://t.co/D9J3ySzbzO

That's pretty cool but missed opportunity at Lake Louise but maybe the next #OilersLiveCup destination 🤔 https://t.co/bTYSClUmbo

I mean it's a nice view, but could you imagine what it would have looked like if they'd had the game at Lake Louise instead? 😍 https://t.co/HRuBg9j2Qt

Man imagine if we had on #NHLOutdoors at Lake Louise, Alberta for the North Division. https://t.co/r6blkfplOO

I feel we absolutely screwed this up by not having a Battle of Alberta set in Banff, particularly Lake Louise. It would have looked incredible. #LetsGoOilers https://t.co/H8tl2t2CSI

Listen, we don’t think there was a wrong option here, but we definitely see what people mean about Lake Louise. It would have been a great spot for the North division to have some outdoor games, but we understand it probably wasn’t possible with the craziness of this season.