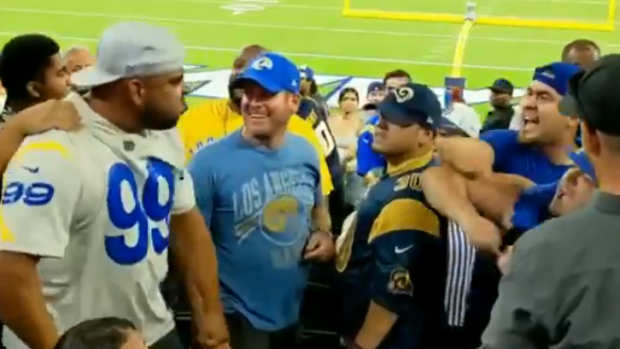 The NFL preseason is officially underway, and football fans are rejoicing around the feeling of watching live football again. Part of the fun of football is the rivaries that stem from it, but sometimes those rivalries can hit a boiling point a little beyond the scope of ‘friendly.’

The Los Angeles Chargers and the Los Angeles Rams may be new to the city, but they now have a geographical responsibility to intensify their rivalry. That rivalry hit the aforementioned boiling point during a preseason game between the two teams.

A Rams fan, sporting an Aaron Donald jersey, appeared to be in an argument with a fan wearing a Chargers jersey (with a bunch of buddies in Rams jerseys). In a video that begins with a whole lot of chest puffing, a brawl suddenly breaks out with the Donald jersey fan (ironically) getting triple-teamed.

Huge fight at the Rams-Chargers game at SoFi Stadium... pic.twitter.com/aOrndTxdKF

Tensions were obviously high already, but do you want to know what actually started the fist-swinging? As the Donald-jersey fan turned away from the argument, a woman seemingly separate from the argument itself got things going in a hurry.

The woman could also be seen later on in the brawl being pinned up against a railing while two combatants duked it out.

Sheesh. What an eventful brawl.