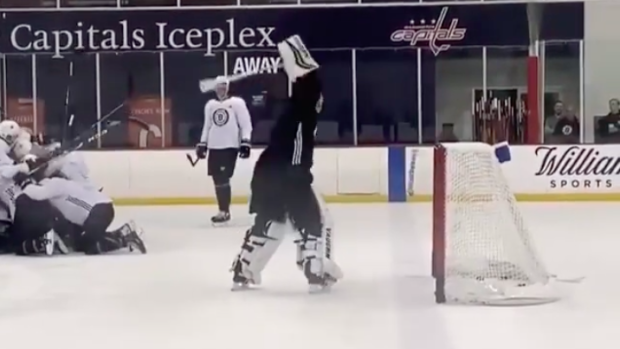 The end of the Boston Bruins’ intra-squad scrimmage was absolute mayhem. They’re just joking, of course, but you had the entire team getting into a sprawling line brawl on the ice. No mock goalie fight, unfortunately, but Tuukka Rask definitely held up his end of the bargain.

Watching Rask smash his stick into the crossbar until it breaks, and then flinging the pieces for good measure, is so satisfying. Everything else might be a joke, but the equipment damage is real!

EVERY MAN FOR THEMSELVES 😂 pic.twitter.com/zN0IroXyy1

Missed Tuukka Rask snapping his stick on the crossbar but he’s MAD about something at the end of practice. Bruins teammates are overjoyed. Seems all in good fun? pic.twitter.com/SFSNScfgyt

The Bruins have lost three straight games, so obviously, everything is going off the rails in the locker room.

Actually, with a significant lead over the rest of the Atlantic Division and still the second-best point total in the league to boot, the Bruins don’t really have much to worry about. So, why not have some fun and chuck some knuckles? Putting your teammate in a headlock is actually high-level team building.

#NHLBruins coach Bruce Cassidy on today's practice in D.C.: "Our record is very good, but we've got to get back to enjoying our game a little more while taking care of business and balancing the two." pic.twitter.com/NNkvFwqYrU

.@1996_Carlo on keeping things loose today: "It’s kind of a reset for us right now to go out there and have some fun, find our appreciation for the game again. Overall, we’re thankful and blessed to play this game each and every day." pic.twitter.com/gK2mzChHvF

.@DHeinz43 on the B's approach to today's practice: "Mental energy, that's a real thing. If you keep it positive, guys are joking around and keeping it light, that gives you more energy and makes it a lot more fun." pic.twitter.com/Wp4ESck5td