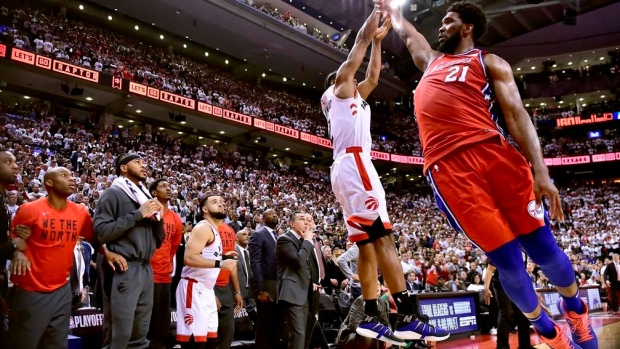 D.J. Augustin’s first-round game-winner notwithstanding, the Toronto Raptors met their first real test in the 2019 playoffs against the Philadelphia 76ers. Before culminating in one of the greatest shots in NBA history, this was a back-and-forth series, and it delivered moments both stressful and exhilarating.

We pieced together five of the biggest moments from the Raptors-76ers series in chronological order, as a timeline retracing the highs and lows of the series. Of course, you’ll remember Kawhi’s shot, but what about the rest?

You can relive the Raptors’ incredible 2019 championship run on TSN and Sportsnet. Game 1 against the 76ers airs tonight on Sportsnet.

This moment was the exclamation point in a blowout Game 3 win for the 76ers, an absolute gut-punch to the spirits of Raptors fans early in the series. With a 24-point lead late in the fourth quarter, Joel Embiid saw Marc Gasol frantically closing out to the three-point line, and freed himself with a pump fake to get to a wide open driving lane. With all that space — and that massive lead — he figured, why not go for the windmill?

His airplane celebration was just insult added to injury, and this was definitely the low point of the series for the Raptors as they fell to a 2-1 deficit in humbling fashion.

Kawhi Leonard’s dagger (the first one)

Oh, we’ll get to that other game-winner in a bit, no doubt. But first, just to get to that point, the Raptors needed to get the momentum back in Game 4, and the 76ers came dangerously close to their third straight win.

In Kawhi’s first big clutch playoff moment for the Raptors, he did his thing, isolating at the top of the three-point line. Drawing Embiid on a switch and with Ben Simmons recovering over — no matter. Leonard stepped back for a huge triple to put the cap on a Game 4 to tie the series up at two games apiece.

This is the story of Game 5, really. If Game 3 was the decisive 76ers win and Game 4 was the one that the Raptors gutted out, then Game 5 is when Toronto got their mojo back. This was the blowout of the series — a 125-89 win at home to retake the series lead — and Embiid was held to 13 points by Gasol’s masterful work in the post defensively.

For the series, Embiid averaged just 17.0 points per game on a .370 field goal percentage, down from 27.5 points on .484 shooting in the regular season, and when he checked out of Game 5 for good early in the fourth, Drake and fans at Scotiabank Arena hit him back with his own celebration as if to say, oh, you tried flexing on us?!

#Drake and #Raptors fans went into airplane mode as #Embiid checked out of the game 😂 . (🎥: @houseofhighlights)

Who will step up?

Considering this more of a trend than a specific moment, although it was certainly felt through the first half of the Raptors' series against the 76ers. Kawhi was doing his thing, but contributions from the rest of the team were scarce. Fred VanVleet and Norman Powell were nowhere to be found, and Marc Gasol's seeming unwillingness to shoot coincided with three-point shooting slumps from Kyle Lowry and Pascal Siakam.

It wasn't smooth sailing all the way, but the Raptors got the performances they needed when it counted. For the first time in series, all five starters scored in double-digits in the Raptors' emphatic Game 5 win, and Serge Ibaka stepped up with 17 off the bench as Toronto’s second leading scorer in the decisive Game 7.

Some of these shooting slumps would linger into the next few playoff rounds — VanVleet flipped the switch against the Milwaukee Bucks, and Danny Green didn’t have his breakout game until the NBA Finals — but against Philadelphia, it was often question of who else, other than Kawhi, would step up.

Kawhi Leonard’s game-winner (THAT ONE.)

Oh yeah. You know the one. This was the NBA's third best play of the decade, and frankly, that might be on the low side.

What’s the secret to happiness? Game 7, tied at 90 each. “DEFENDED BY SIMMONS...” A curl to the right corner. Four bounces. “IS THIS THE DAGGER?”

Kawhi Leonard drops in the #TissotBuzzerBeater to lift the @Raptors to the Game 7 win! #ThisIsYourTime #WeTheNorth pic.twitter.com/bpRx7GXiKu