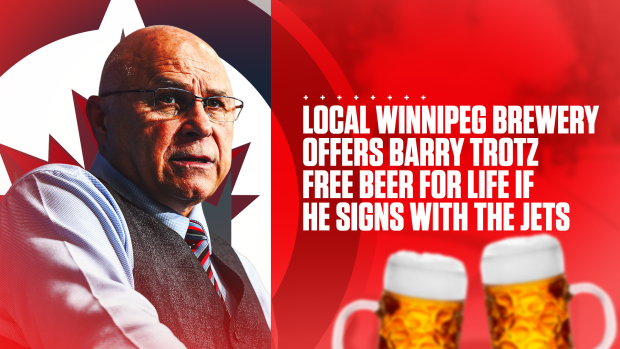 If Barry Trotz needed any more incentive to coach the Winnipeg Jets, he just got it from a local brewery.

Little Brown Jug Brewery Company launched a campaign with Winnipeg Sports Talk that will offer Trotz free beer for life if he elects to return to his home province of Manitoba. Per the Globe and Mail, the idea came to fruition from a conversation between company founder Kevin Selch and office administrator liaison James Hofer last week. Trotz, 59, was surprisingly fired by the New York islanders in May after manning the bench for four seasons.

Some passionate words there from Andrew ‘Hustler’ Paterson. You tell’em, Huss!

The Jets are part of an exclusive club of teams without a head coach, which also includes the Boston Bruins, Dallas Stars, Detroit Red Wings, Philadelphia Flyers, and Vegas Golden Knights. Trotz reportedly already interviewed for the Jets’ vacant position but not many details have been released since.

Barry grew up just three and a half hours up the road in Dauphin, Manitoba, so this one could be a dream come true for both Jets fans and the Trotz family. With a core of Mark Scheifele, Kyle Connors, Blake Wheelers, Josh Morrissey, Connor Hellbuyck, Nik Ehlers and potentially Pierre-Luc Dubois to work with, this could be a perfect match to get both Trotz and the Jets back in the playoffs.

And who knows, maybe they’ll all be drinking Little Brown Jug beer together out of a certain silver mug in roughly a years’ time if things pan out?