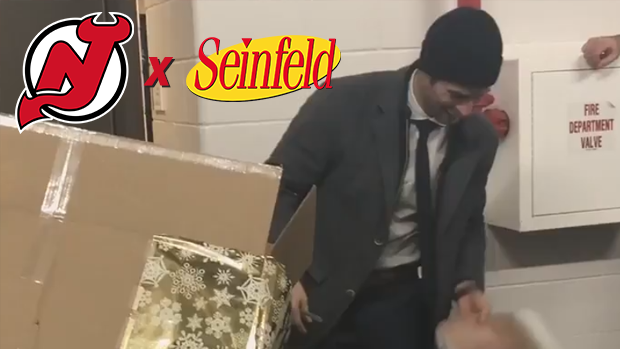 Adam Henrique was a leader on the New Jersey Devils for several years before he was ultimately traded by the team earlier this season. One way he definitely led the team was with his sense of humour.

Frequently, we discuss how the Devils seem to be a hot spot for great jokes on social media. With Taylor Hall, Keith Kinkaid, Beau Bennett and several others seeing their peak social media presence coming on that team. Well, Henrique may have had an influence on that, because he was always full of jokes on Twitter.

One of his most famous tweets came from when the Devils held a contest to get a new design for Keith Kinkaid’s goalie pads. Henrique submitted the “Pads of Seduction”.

. @NJDevils I call them “The Pads of Seduction” inspired by @steviegio11! I hope you like them @Blockaid1 pic.twitter.com/VyyIJypi9g

Now, the Devils made his dreams a reality and upon his return to New Jersey he not only did he score a filthy goal (While going around the person he was traded for), but he received real Pads of Seduction after the game.

A parting gift from @blockaid1 and the #NJDevils! The #PadsOfSeduction are finally in @AdamHenrique’s possession.

It was a special day, but the most emotional moment may have come during the game when Henrique was honoured with a special video from the Devils. What a homecoming.