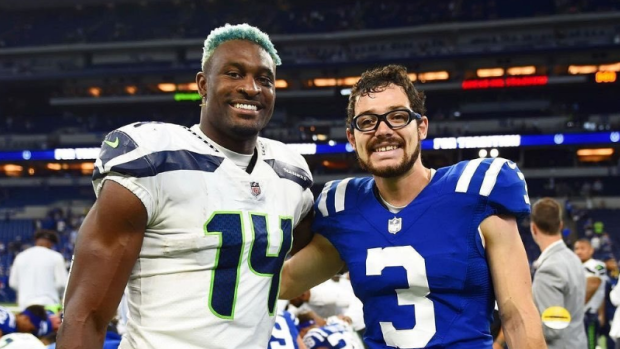 It’s pretty rare to know that you’re going to become a meme. Usually it’s a candid moment, a reaction, or even a facial expression that can set Twitter on fire, and suddenly the meme becomes directly associated with the thought of that person.

For Seattle Seahawks wide receiver DK Metcalf and Indianapolis Colts kicker Rodrigo Blankenship, it wasn’t even anything they did. It was simply that they exist within the same medium of football.

It all started with a tweet from Twitter user @JPopASU who simply declared his love for the NFL based on the fact that it is a place that both subjects may exist. The very obvious juxtaposition is comparing Metcalf’s hulking build next to Blankenship’s somewhat dorky demeanor.

From the original tweet, NFL Memes, SportsCenter, and other outlets picked up on it:

I love the NFL because both of these humans play the same sport professionally pic.twitter.com/EpnOzCU0ub

In December, Blankenship acknowledged that he knew about the meme. Speaking with Adam Lefkoe that he’s no DK Metcalf, but that he’s likely more built than people think. He references the NFL combine for proof.

On Sunday, the two finally met and posed for a picture after the Seattle Seahawks defeated the Indianapolis Colts. You can certainly see a size difference, but both seem more than happy to appease us meme enjoyers on Twitter. Blankenship even posted the photo to his own Instagram.

As the old saying goes, nothing brings people together more than being featured in the same meme!