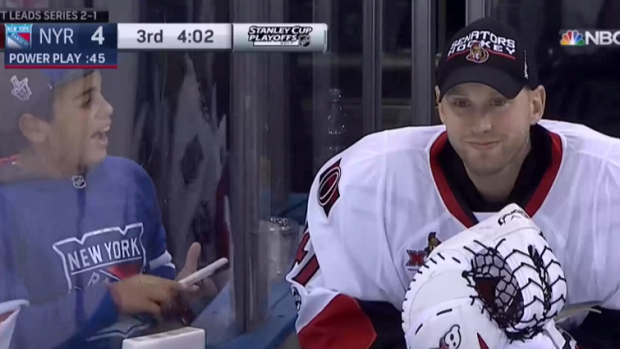 Craig Anderson is nominated for a Masterton trophy this year, an award which honours the sportsmanship of a player, among other things.

Tonight he offered a glimpse into how he lives his life and it’s in an admirable way.

Getting pulled is one of the worst feelings a goalie can have in hockey. It fully cements your game as a poor performance and now there’s no way to redeem yourself in the next game. On top of that, you have to sit out in the public eye, clearly unhappy with the outcome of the game. With all of that said, Anderson doesn’t let that keep him down.

While on the bench in the third period tonight, a young fan started talking to Anderson through the glass and he was happy to have a chat.

Anderson is just a total class act and is a lock for the Masterton trophy this year.

Also, we have to give credit to the kid as well. It’s easy to be the fan that stands behind the glass and yells at players after a poor game, but he’s just there to have a chat. Give him the fan equivalent of the Masterton trophy.

It’s definitely a better experience with the fans then the Sens had in Boston.