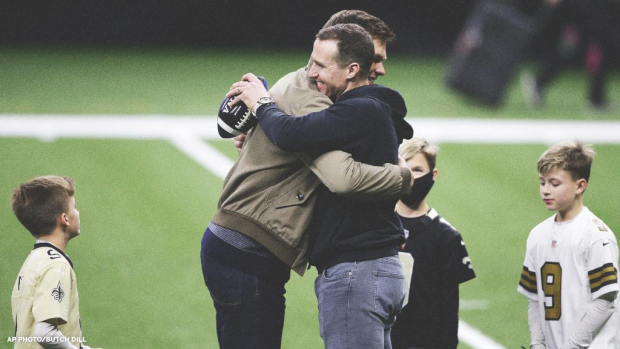 Drew Brees and Tom Brady are two of the greatest quarterbacks of all-time. In fact, their skill mixed with their longevity has been a combination that has put the two of them atop a ton of the positions most significant stat categories.

Don’t take the greatness in this game for granted.

The two have competed in different conferences, so this was the first time we’ve gotten to watch them play against each other in the playoffs. Now the question that everyone is asking, was it the last time?

Following the game, in which Tom Brady and the Tampa Bay Buccaneers advanced to the NFC Championship, Brees and Brady met up on the field to share a moment a little more private than their initial meeting following the game. The two stood in their street clothes with Drew Brees’ family and chatted, and Brady even through a touchdown to Brees’ son in the corner of the end zone.

As Tom Brady and Drew Brees hug and say goodbye after a long talk on the field, Brady throws a touchdown pass to Brees’ son. One walks off to play in the NFC championship, the other stays to play with his kids. pic.twitter.com/wdWDro9YD4

Whether Brees does in fact retire after this or not, or Brady for that matter, that’s a moment that all football fans can appreciate. Two quarterbacks that gave their all to the sport we love so much.