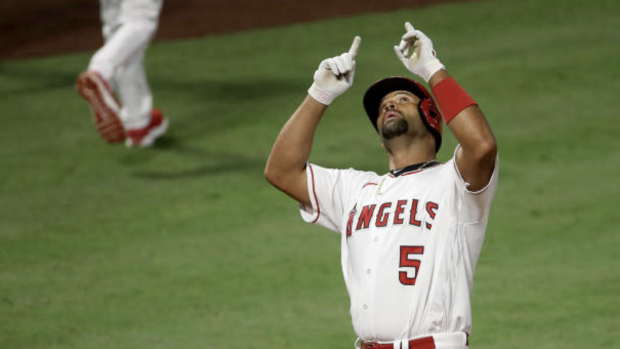 Alright, so this situation is a little confusing and still developing so we’ll attempt to take the Michael Scott approach and explain this like we’re five.

In one of the most unique ways to hear about a player's career-ending, it has been speculated that Albert Pujols will be retiring following the 2021 MLB season.

In an Instagram post Monday evening, Deidre Pujols initially commented on the 10-time All-Star’s journey within baseball and further probed this season to be the end of the “good race.”

"Today is the first day of the last season of one of the most remarkable careers in sports! I’m talking about my husband @albertpujols who since the time he was a child would eat, sleep, and breathe this sport. I have had the privilege to walk out 23 years of this baseball journey and it is with such a full heart that I speak a blessing over him as he finishes this good race...Thank you for 21 years of incredible baseball thrills! Finish strong like the Angel you are and I know you will wow us all this 2021 season as usual!”

Though, here is where baseball remains an absolute soap opera as Deidre had gone back into her initial statement, switching it to read the following:

“THIS IS NOT AN OFFICIAL STATEMENT OF PUJOLS RETIREMENT I'M JUST TRYING TO SEND MY HUSBAND WITH BLESSINGS INTO 2021 SEASON 😇🙏🏻!! Today is the first day of the last season (based on his contract) of one of the most remarkable careers in sports! I’m talking about my husband.”

We’re a little confused to be totally honest. Maybe it was a simple miscommunication? Maybe Pujols will actually be retiring after this season and they didn’t want to distract from the 2021 season?

Pujols himself commented on the post with three red hearts.

“The Machine” is currently entering his tenth season with the Los Angeles Angels, after spending his first eleven seasons with the St. Louis Cardinals.

​Though it wouldn't be a huge shock to see Pujols ending his major league career as he is 41 years old and his 10-year, $240 million contract with the Angels is set to end after this season.

And of course, people within the baseball community shared their views following the end of Pujols' legendary career and the whole situation.

Some “milestones” to watch for in Pujols’ last season:

Albert Pujols after the 2021 season pic.twitter.com/JPo97bqCh9

Albert Pujols when he sees his wife after he hits a 450ft bomb in spring training https://t.co/k03IBVGBPy pic.twitter.com/5rGWCbvmqx