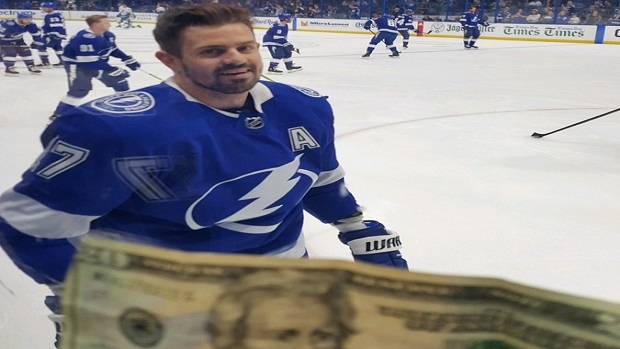 This is just our friendly reminder that it’s never a good idea to use the boards as a table or a cup holder when you’re sitting in the first row at a hockey game.

On Tuesday night the Tampa Bay Lightning hosted the Vancouver Canucks and a fan forgot about that golden rule for a split second and was reminded pretty quickly why you don’t put a beverage on the boards.

Hanging out with a friend at the glass during warmups. @Akillorn19 takes out his beer. Then reimbursed him for it. Thanks for the laugh, and wet shoes 😂 pic.twitter.com/Zz5r8ZFQy2

Alex Killorn ended up knocking over the fan’s beer, but ended up reimbursing the fan for his beer as he returned to the area moments later with cash in hand.

That I can not answer. He went over to the bench. Probably someone there. We were too busy laughing to analyze.

Some players will purposely try to knock a fan’s drink over if they see them using the boards as a table, but clearly Killorn felt bad enough about it to go over and get cash to pay the fan back.