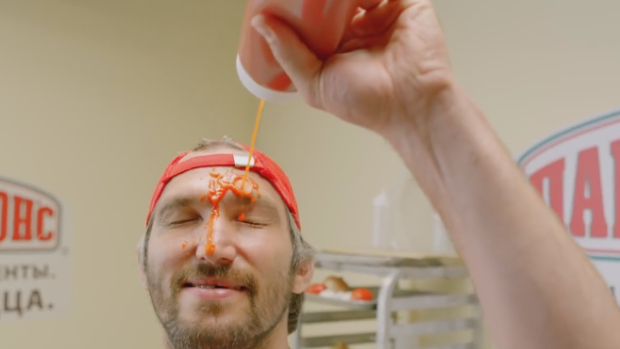 Over his 14-year tenure, Alexander Ovechkin has picked off a few pizzas and made his opponents pay by finding the twine.

When he's not converting on the sauce passes from Evgeny Kuznetsov, Nicklas Backstrom or John Carlson, Ovechkin can found whipping up some other forms of sauce by starring in pizza commercials for Papa John's.

In the first one, the Great 8 meticulously places pieces of pepperoni on a pizza as if he was ripping a shot top corner on the short side in his spot on a Capitals powerplay. We all know the power Ovi possesses when he's bursting down the wing, and like the bull in a China cabinet he is, he ends up taking out a bunch of trays holding the ingredients with his stick. What a weapon!

On the next clip, Ovechkin is once again dressed in full gear but this time rocking a bucket as if he's about to take the ice. With a big smile on his face, Ovechkin enters the kitchen and scoops up a "zaaa" while giving a wink as a sign of satisfaction.

In the third and final commercial, Ovechkin takes off his gear and goes into full-on pizza making mode. After adding a bunch of toppings to a pizza, the Russian sniper goes to cool himself off by reaching for a water bottle to spray his face with. But, he instead grabs a bottle of what appears to be hot sauce.

Papa John's signed Ovechkin to be a spokesman back in 2016, and according to the Capitals blog Russian Machine Never Breaks, when Ovechkin was a child, he actually wanted to one day deliver pizzas!

There's no shortage of options Ovechkin will have at his disposal when he's done playing hockey.