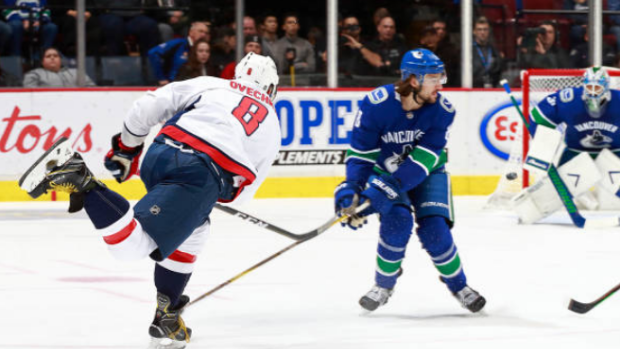 It's no secret that Alexander Ovechkin has some of the best aims the hockey world has ever seen.

Currently sitting 17th all-time in NHL goals with 618, the Great 8 could very well break Wayne Gretzky's record of 894 when it's all said and done. In terms of goals per game, Ovechkin ranks fourth all-time with .608 (minimum of 700 games played) only behind Pavel Bure, Mario Lemieux and Mike Bossy.

Ovechkin's aim off the ice appears to be just dandy as well, at least with a metal spatula in his hand.

Posted on his Instagram story, Ovechkin brought his wife to a Hibachi restaurant where he showed off his soft hands in front of a much smaller crowd than he's used to.

Ovi the sniper. 😂 ••• (🎥Via: @aleksandrovechkinofficial)

A true sniper indeed wearing sweatpants and all. With the chef yelling "a little more" in the background, you know Ovi had to go for the hattrick.

Honestly, what can't he do? And don't say win a Stanley Cup, but that's no longer the case, folks.

Ovi has picked up where he's left off from previous years by potting 11 goals in his first 13 games of the season for 17 points total.