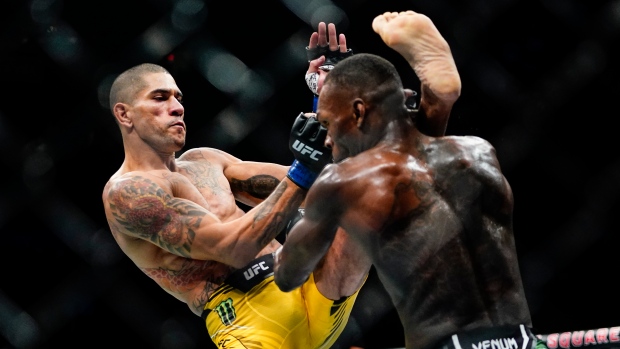 UFC middleweight champion Alex Pereira says he went into his title fight against Israel Adesanya at less than 100%.

Pereira told ESPN Brazil's Gustavo Faldon in an interview Wednesday that he suffered torn ligaments in his right middle finger two months ago and couldn't grapple for two to three weeks during his training camp because of the injury.

"I didn't train very well for this fight. I could have been better," Pereira said. "But I won, I became champion. A lot of people talk nonsense and don't know what was going on. I [tore] the ligaments. I think I can come back better for this next fight."

Pereira has beaten Adesanya all three times he has faced him. They fought twice in kickboxing, with Pereira winning both times, the most recent by knockout in 2017. Now, Pereira has a win over Adesanya in MMA, too, also by KO/TKO. He's the only man to knock Adesanya out. Adesanya was ahead on all three judges' scorecards, though, before Pereira finished him in the final round.

Pereira told ESPN Brazil that he is planning a return to the Octagon next spring or early summer, sometime between April and July. The opponent seems likely to be Adesanya, but Pereira doesn't necessarily have a preference.

"It doesn't matter to me whether he or another will come," Pereira said. "If I were him, I would wait a bit, but since he wants to ... he was the champion. If he really wants that, he deserves this rematch. It was a good fight. He hit me, he believes he can beat me. It doesn't matter to me, I'll fight. If there are two people, Adesanya and someone else, and you say who I want, I'll say 'Adesanya.' Because he is him."

Pereira (7-1) is 4-0 in the UFC with three KO/TKO finishes. Known for huge power in his hands, particularly his left hook, the 35-year-old Brazil native is the former Glory Kickboxing middleweight and light heavyweight champion.

Pereira added in the interview that the talk from rising star Khamzat Chimaev on social media about a potential fight next month is just that -- talk.

"Any guy who understands the slightest bit about fighting will say, 'This guy is an idiot,'" Pereira said of Chimaev. "He wants to promote himself."