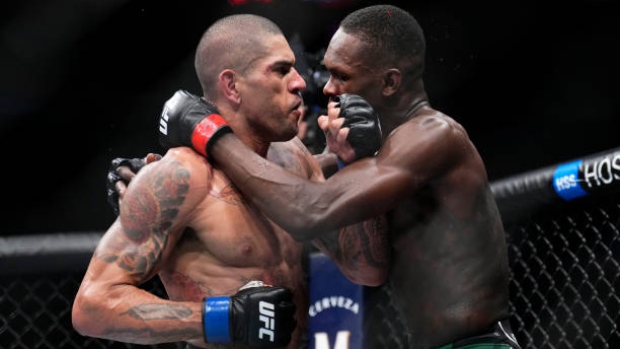 NEW YORK -- Alex Pereira had Israel Adesanya's number in kickboxing. He has it in MMA too.

Pereira, the only man to ever knock out Adesanya, stopped him again via TKO at 2 minutes, 1 second of the fifth and final round Saturday night in the main event of UFC 281 at Madison Square Garden. With the victory, Pereira won the UFC middleweight title in just his fourth fight with the promotion. Adesanya had been the champion since 2019.

Adesanya had been winning the fight until the final sequence, with Pereira firing a barrage of punches with Adesanya hurt against the cage. Referee Marc Goddard stepped in to stop it after a flurry of left hooks and right hands, though Adesanya was never dropped.

Pereira said that in his corner before the fifth round, his coaches and his MMA mentor Glover Teixeira, the former UFC light heavyweight champion, "kept it real" with him.

Pereira and Adesanya fought twice before in kickboxing, with Pereira winning both times, the most recent a 2017 knockout of Adesanya.

"It's another great story for him, but it's not over," Adesanya said. "This is still war."

Coming in, ESPN had Adesanya ranked No. 2 on its pound-for-pound list of best MMA fighters. At middleweight, Adesanya was No. 1, and Pereira was ranked No. 7.

All three judges had Adesanya ahead 39-37 going into the fifth round, with Adesanya winning every round except the second. There were similar circumstances in their second kickboxing match, with Adesanya dominating the first two rounds before Pereira knocked him out in the third.

In the first round on Saturday, Adesanya rocked Pereira at the end, and a wobbly Pereira was essentially saved by the bell. Pereira came back strong in the second round with a pair of his signature left hooks. Adesanya was able to keep Pereira at bay in the third and fourth and even did some wrestling and grappling to win the third.

In the fifth, Adesanya oddly stumbled and rolled backward after a leg kick exchange. He said in the postfight news conference that Pereira landed a kick to the peroneal nerve of his right leg, which can numb the leg.

"That's why my footwork was compromised," Adesanya said. "It was just my leg. My leg gave away. Kudos to him. He invested in those [calf kicks] well."

Pereira (7-1) knocked out Sean Strickland in the first round at UFC 276 in July to earn the title shot. The Brazilian slugger has six KO/TKOs in seven career MMA victories and is 4-0 in the UFC. Pereira, 35, is a former Glory Kickboxing middleweight and light heavyweight champion.

"So many years of hard work and dedication, and here I am, champion of the world," Pereira said.

Adesanya (23-2) had won three straight fights and was undefeated at middleweight coming into this bout. His only career loss before this was in a light heavyweight title fight last year against Jan Blachowicz. The Nigerian-born New Zealand resident had five successful middleweight title defenses following a win over Robert Whittaker to earn the belt in October 2019. Adesanya, 33, was coming off a unanimous decision win over Jared Cannonier at UFC 276 in July.

UFC president Dana White said he wouldn't rule out an immediate rematch between Pereira and Adesanya, which Adesanya said he is expecting.

"He's been a great champion for us," White said of Adesanya. "He likes to fight all the time. He doesn't say no. He'll fight anybody. Those are fun guys to have. And he's a good person."