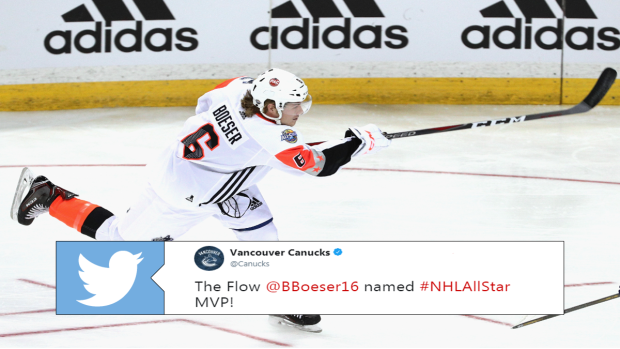 Brock Boeser flat out had a weekend to remember.

After winning the accuracy shooting event, the Canucks rookie notched two goals and one assists to propel Team Pacific to victory at the 2018 NHL All-Star game, and came away as the MVP. He became the first ever Canuck to win the award.

His MVP honours put him next to some pretty elite company, and also got him a brand new car which he’ll give to his sister.

Brock Boeser is the first rookie since Mario Lemieux in 1985 to win #NHLAllStar MVP honors. pic.twitter.com/6rYyW7xQS1

By being named to the game, winning the accuracy competition, winning the MVP, and being a part of the wining team, Boeser walked away from the weekend with over $550,000.

This wasn’t the first time Boeser had won something significant in Tampa. He won the 2016 NCAA Frozen Four tournament with North Dakota as the top team in college hockey.

Boeser leads all rookies in goals at 24 is likely to be one of the finalists along with Islanders centre Mathew Barzal for the Calder Trophy.

"I was definitely nervous coming into it, I had sweat going down my palms..." @BBoeser16 ends his #NHLAllStar weekend speaking with the media. pic.twitter.com/nWbOcryOpr

Not bad for a player that wasn’t even on the all-star ballot when it was intially released.

What a weekend! Had a great time competing with and against the @NHL’s best. Thank you @TBLightning for hosting and #Canucks fans for the support! pic.twitter.com/WiatBa85ji