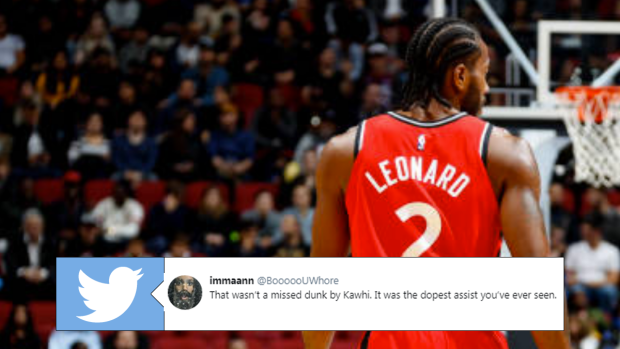 Any Raps fan that believes the deal made over the summer involving superstars Kawhi Leonard and DeMar DeRozan was bad for Toronto likely had a bit of an “I told ya so” moment for all of about two seconds.

While single plays shouldn’t be defining as to whether or not trades worked out, the Kawhi trade nay-sayers were probably feeling pretty dignified in their stance after he missed what appeared to be a pretty wide open dunk. Unfortunately for them, the rebound came straight out to Danny Green, who did what Danny Green does and nailed a three pointer.

Kawhi misses a wide open dunk but Danny Green cleans it up with a deep three pic.twitter.com/SvMhYkDuna

No, one play does not mean that the trade was a good or bad play, but it’s almost symbolic that Raps fans would be let down from an electrifying play only to be made up by one moments later, from the second piece in the deal at that!

That wasn’t a missed dunk by Kawhi. It was the dopest assist you’ve ever seen.

Me waiting for Kawhi to dunk pic.twitter.com/AySg2P2iyp

Kawhi missed dunk bounces out, right to Danny Green for three. They speak the same language.

Kawhi steal (awesome), to Kawhi missed dunk (not so awesome), to a made Danny Green three ball (seriously, this team is awesome) #WeTheNorth