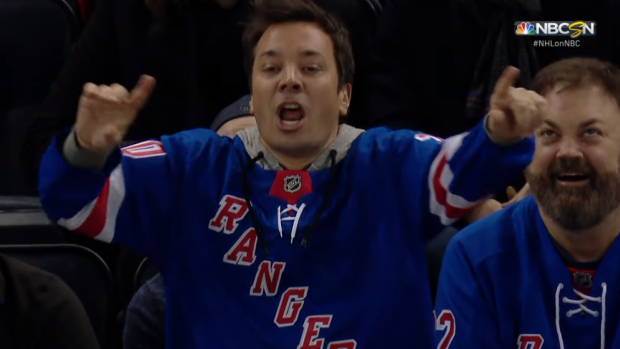 A Tuesday night tilly between two non-playoff clubs in the Big Apple might not be the most circled game on the calendar, but don't tell Jimmy Fallon that.

The late night talk show host was taking in the divisional battle between Rangers and Flyers game when cameras caught Fallon showing off his fandom by having an absolute blast in the stands.

@jimmyfallon is FIRED UP! • (🎥 Via @nhlonnbcsports)

If the Rangers ever needed a hype man, they could make one phone call and it would be to Jimmy Fallon, no matter how excessive he might be.

Fallon, a noted hockey fan, has brought in hockey superlatives to "The Late Night Show with Jimmy Fallon" in the past, most recently during last year's Stanley Cup Playoffs.