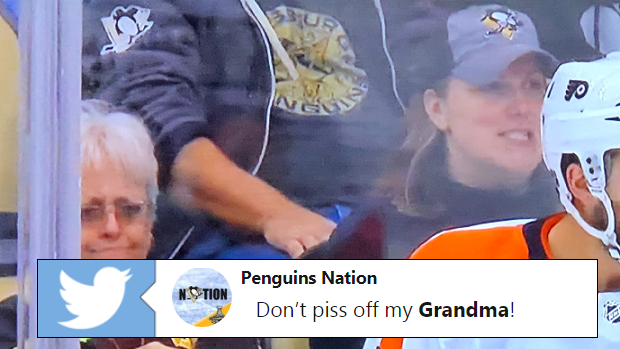 Some fans just can’t control themselves.

During a battle of Pennsylvania showdown at PPG Paints Arena, an elderly member of the Pittsburgh Penguins faithful was caught flipping the bird at Philadelphia Flyers defenceman Brandon Manning after the latter scored the game's third goal. Unfortunately for her, she was essentially front and center in the television broadcast.

The following tweets are not suited for a working environment.

Don’t piss off my Grandma! pic.twitter.com/XSankApRAa

Me and my grandma’s feelings on Philadelphia pic.twitter.com/VCbQ9NdFVW

That’s what I think of @NHLFlyers too, grandma! 🤣 Lets go @penguins ! pic.twitter.com/Z4uy7yJ1E1

You give it to him grandma. No matter how old you are this is how @penguins fans feel about the flyers @Jeremy_Roenick pic.twitter.com/3xCT0N5iSs

@penguins vs @NHLFlyers ... grandma’s on the loose look out flyers!! pic.twitter.com/ND0B7V9OM3

Just caught the replay of this nice looking Grandma throwinf out the bird in the @penguins @NHLFlyers game. pic.twitter.com/xVSDV1xeVV

The fans ultimately had the last laugh as Pittsburgh prevailed in a thrilling 5-4 overtime win to bring them within three points of the Metropolitan Division leader Washington Capitals. With the victory, Pittsburgh completed the three game regular season sweep over Philly. As it currently stands, they could meet in the first round of the playoffs if the Flyers can leapfrog the Columbus Blue Jackets in the Metropolitan. Can you imagine what the fan would do with potentially four more home games in the playoffs?

For whatever reason, the Flyers seem to have a tendency to bring out the worst in opposing fans. In 2010, a Bruins fan was caught performing the exact same action in an Eastern Conference matchup at TD Garden.

Today’s incident was proof that no matter how old a fan is, emotions can get the best of everyone. For future reference, maybe try to be a bit less obvious, though.