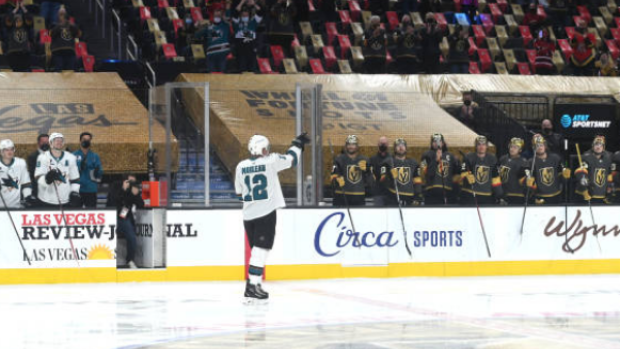 Patrick Marleau stands alone atop the NHL Games Played list after passing Gordie Howe’s mark of 1,767. The special night was full of different congratulatory gestures from around the league.

During an early stoppage in play, the Vegas Golden Knights gave Marleau the tribute he deserves to a standing ovation in T-Mobile Arena. The fact that this kind of love can be shown in an opposition’s barn clearly proves how beloved Marleau is around the NHL.

The tribute included a long message from NHL commissioner Gary Bettman, and when the cameras refocused on Marleau, it was clear how overcome with emotion #12 was.

A special moment for Patrick Marleau in Vegas.

An emotional Patrick Marleau was acknowledged in-arena for his 1,768th career NHL game.

What an awesome moment.

It wouldn't be the same without your biggest fans in attendance.