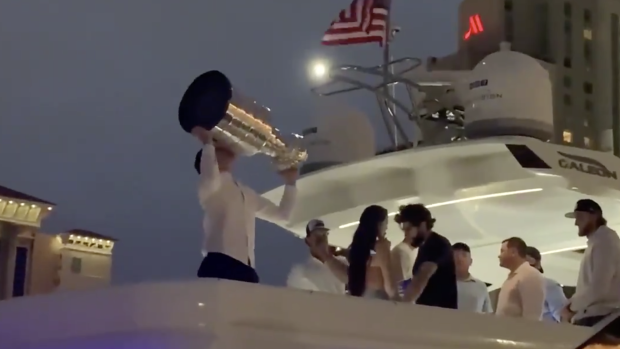 Kind of a wild scene to be on vacation and just happen to stumble upon Andrei Vasilevskiy partying on a yacht with the Stanley Cup.

This year has been pretty odd for championships. Due to COVID-19, parties and parades have been limited or canceled altogether which is definitely not the homecoming we're used to seeing for champions but safety is the priority.

The Tampa Bay Lightning are making the rounds after winning the Stanley Cup in the NHL's shortened season, and while their offseason will also be cut short - meaning the cup will have to zoom around, they're making the best of the situation.

The cup is currently in the hands of Lighting's goalie Andrei Vasilevskiy and he is spending some quality time with Lord Stanley.

I’m on vacation in Tampa. Just stumbled upon the Stanley Cup and Andrei Vasilevskiy party pic.twitter.com/LJzaxo3LCR